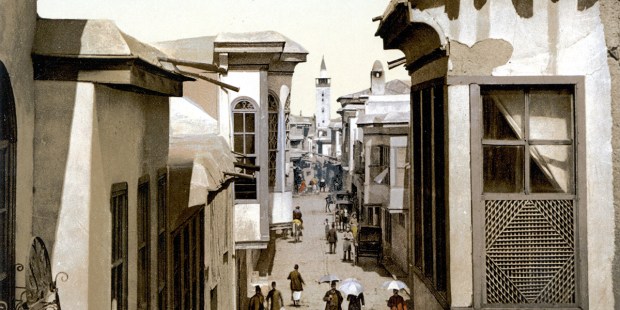 Jesus refers to the street in Damascus in Acts, as the place where Saul was to be baptized.

This print from 1900 shows Straight Street in Damascus, Syria, a scene that probably did not look too different from the way it appeared in the Acts of the Apostles as the site of Saul’s baptism.

Straight Street, also known as Via Recta, is the old Roman road that runs from east to west in the old city of Damascus.

In Acts, Saul, blinded by a flash of light, encounters a vision of Jesus who tells him: “I am Jesus, whom you are persecuting. Now get up and go into the city and you will be told what you must do.”

A stumbling Saul was then led “by the hand,” to Damascus where he was he met with Jesus’ disciples who baptized him and took him in as one of their own, sharing the Gospel wherever they went.

The passage (Acts 10-19) explains how Ananias had a vision of Jesus telling him to go to “the street called Straight” to find Saul:

There was a disciple in Damascus named Ananias, and the Lord said to him in a vision, “Ananias.” He answered, “Here I am, Lord.”

The Lord said to him, “Get up and go to the street called Straight and ask at the house of Judas for a man from Tarsus named Saul. He is there praying, and [in a vision] he has seen a man named Ananias come in and lay [his] hands on him, that he may regain his sight.”

But Ananias replied, “Lord, I have heard from many sources about this man, what evil things he has done to your holy ones in Jerusalem.

And here he has authority from the chief priests to imprison all who call upon your name.”

But the Lord said to him, “Go, for this man is a chosen instrument of mine to carry my name before Gentiles, kings, and Israelites, and I will show him what he will have to suffer for my name.”

Today, the western half of Straight Street is known as Midhat Pasha Street, and the eastern half as Bab Sharqi Street (pictured below):