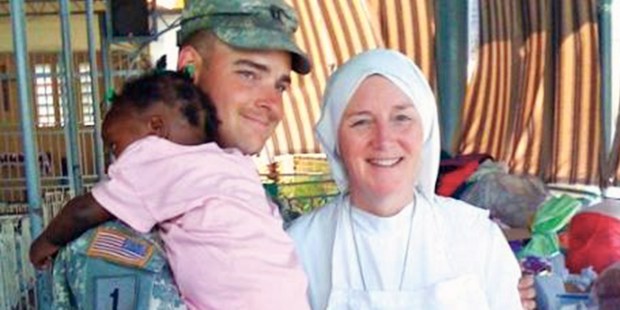 “Sister Dede,” as she is known, has traded military fatigues for the habit of a medical missionary religious.

Deirdre Byrne has been addressed with several different titles in her life, including Doctor and Colonel.

On the Fourth of July, she heard President Donald J. Trump address her with the title she cherishes most.

“From our earliest days, Americans of faith have uplifted our nation,” the president said during his speech at the Independence Day celebration at the Lincoln Memorial. “This evening, we are joined by Sister Deirdre Byrne. Sister Byrne is a retired Army surgeon who served for nearly 30 years. On September 11th, 2001, the sister raced to Ground Zero. Through smoke and debris, she administered first aid and comfort to all. Today, Sister Byrne runs a medical clinic serving the poor in our nation’s capital. Sister, thank you for your lifetime of service.”

Sister Byrne, or Sister Dede as she is known informally, sat among other Americans that the president wanted to highlight in his speech and hold up as citizens whose service and sacrifices have contributed to the nation. In an interview July 8, she expressed surprise that she was chosen to be sitting among American heroes who are, in her estimation, far more worthy.

“I’m not 100% sure. I received a call the Sunday before,” she said. “I’m prior military, for one thing, and I guess the mixture of the three things that I do, being a general surgeon, serving in the military, and religious sister” caught the attention of the White House.

She speculates that her story may have become known because a brother of hers, Fr. William Byrne, has been a pastor in Washington parishes that are attended by persons working in government.

But if she questions why she deserved any special recognition on July 4, there doesn’t seem to be any doubt about why her life has turned out to be one of service to others, even though it’s been a somewhat unusual combination of soldier, surgeon and religious sister. Her parents’ example certainly helped. Her father, a surgeon, and her mother, a homemaker, reared a large family in McLean, Virginia and went to Mass daily. Her father was a Georgetown School of Medicine alumnus, and two brothers also went there.

So Deirdre followed suit. She joined the Army in 1978 as a medical student and received a military medical scholarship. She did a three-year family medicine residency at the U.S. Army hospital at Fort Belvoir, Virginia. Then, as a full-time officer in the Army Medical Corps, she eventually became a colonel. Among the places she served, she spent 13 months in Egypt’s Sinai Peninsula, where she was a liaison between the Army and the monks of St. Catherine’s Monastery at the base of Mt. Sinai. She also practiced family medicine and emergency medicine in Korea.

After completing her seven-year commitment, in 1989, she spent a year doing missionary medicine, including time working in India. There, she caught up with a religious sister she had known from when she was in high school. Sister Frederick Neidfield, who had trained at Georgetown with Sister Dede’s father, was a medical mission sister. Their renewed friendship encouraged Sister Dede to pursue a similar dual vocation.

But first, she did a general surgical residency program and surgical training with the Army. She was a resident at Georgetown in 1996 when Cardinal James Hickey, then-Archbishop of Washington, had open-heart surgery. She got to know him during his post-op recovery stay in the hospital.

The following year, 1997, she was asked to be on hand when Mother Teresa of Calcutta visited Washington for five days, in case of any medical need. She was feeling more and more called to religious life herself and hoped to find a community to join that was both “traditional” and centered on the Eucharist. Mother Teresa’s Missionaries of Charity seemed a natural.

But she had a chance to sit down with a well-known Jesuit priest, Fr. John Hardon, who told her point blank: “You will not join the Missionaries of Charity, because God gave you this gift of medicine. We need Catholic doctors. He will find the right home for you.”

After she spent some time in California, training missionary doctors and completing her board certification in surgery, she was invited by Cardinal Hickey in 2000 to return to Washington to serve the poor. She continued her friendship with the Missionaries of Charity, and in fact collaborated with them in their outreach to firefighters and rescue workers at Ground Zero in New York City on September 11, 2001.

But she came to know another community, the Little Workers of the Sacred Hearts, which was traditional, Eucharist-centered, and missionary. And she could continue practicing medicine.

“I met this sister through a mutual friend,” Sister Dede recalled. “She and I became good friends. I told her I was looking for a medical community, and she said ‘We have nurses and do all kinds of things.’ So I started spending more time with them. … It was just what the Lord wanted.”

She made her first profession of vows, but the U.S. military was becoming more involved in Afghanistan and Iraq. Beginning in 2003, as an Army reservist, she was deployed for six years. She served at Walter Reed National Military Medical Center in Washington, then at Ft. Carson in Colorado. In 2008, she was deployed to Afghanistan, where she took care of wounded citizens.

“We were just six miles from the Pakistani border, so we could hear the missiles overhead,” she told the Georgetown Medical Magazine. “The hospital was one of the few safe zones on the base as it was bomb proof, so our patients were protected from further harm.”

When she returned from Afghanistan in 2009, she finally retired from the Army for good and professed final vows with the Little Workers two years later.

“I was told when I first entered, ‘You put everybody between the Sacred Heart of Jesus and the Immaculate Heart of Mary, and the Lord will take care of them,'” she recalled.

Sister Dede has abundant opportunity to do that, serving as medical director of the order’s pro bono Physical Therapy and Eye Clinic at their convent, as well as volunteer surgeon at the Catholic Charities Medical Clinic (formerly of the Spanish Catholic Center). She also does medical mission trips to Haiti once or twice a year and has returned to the Middle East as well.

She is a board member of Archangel Airborne, a humanitarian organization that brings together nurses, doctors and airline pilots to serve people hit by extreme poverty or natural disasters.

On the local level, Sr. Dede sometimes helps women who have a change of heart after taking medication to effect an abortion. “If they come to her within 72 hours of taking the pill, she can take action to reverse the pill’s trajectory and potentially save the life of the developing child,” Kathy Schiffer reported in the National Catholic Register. “Sister Deirdre reports that … they are able to save about 50% of the babies whose mothers come to the clinic for help in reversing the abortion.”