Grave robbers in gondolas: How the remains of St. Mark came to be in Venice

The body of St. Mark the Evangelist was smuggled out of Alexandria by Venetian merchants in search of an impressive patron saint.

The Venice Biennale is in full swing and is about to get even more crowded with the summer holidays now on. It’s not a tempting prospect for everyone. A century ago the Catholic convert Oscar Wilde described his Venetian gondola experience as “a coffin moving through a sewer.” Wilde’s review is not part of the Biennale promotion, and neither is the body of St. Mark the Evangelist. The world of religion doesn’t impinge much on the Biennale, although the Vatican pioneered its own pavilion there in 2013.

Nine hundred years ago, when Venice really got going as a trading superpower, St. Mark was an irresistible magnet for visitors. Pilgrims would travel enormous distances to be near his mortal remains. How the Evangelist got to be there was not discussed much then, or now. Venetians instead revel in the Piazza San Marco, the Basilica of San Marco and the winged lion of the saint, which has become the city’s symbol. St. Mark probably never visited Venice while he was alive. He spent time in Rome with St. Peter and is thought to have been the first of the four Evangelists to give us a Gospel. Most of his adult life was spent in Alexandria, Egypt, the second largest city in the ancient world. He became the first bishop there, founding Christian churches that have continued until today. Even after his martyrdom in AD 68 he was busy performing miracles. 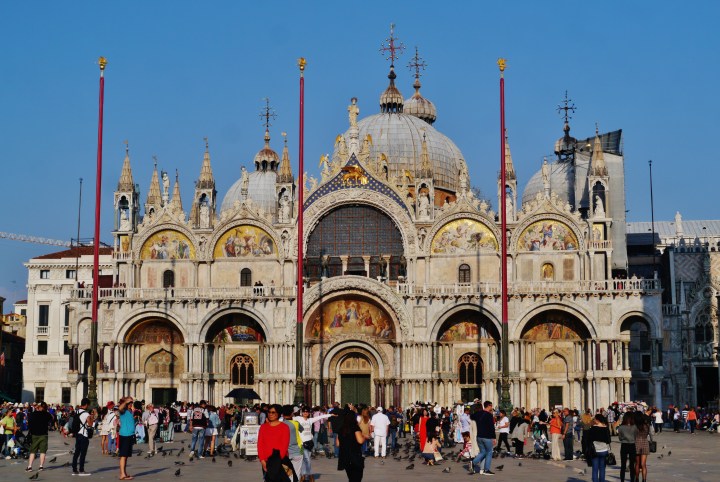 Eight centuries after his death, the Venetian ruling class of merchants decided that a more impressive patron saint was required for their increasing powerful city state. St. Mark of Alexandria was a big enough name to add a spiritual sheen to their economic success. The Christian faithful clung to their relics in those days, which meant the best way forward for Venice was theft. Some enterprising merchants put the plan into action in 828. First, they had to trick the Christian keepers of his tomb. Then they had to smuggle the body out of Egypt, which by then was very much under Muslim control. It might be assumed that the Muslims wouldn’t have cared much about the remains of a Christian saint, but it seems that export controls were tight. The solution for the canny smugglers was to place St. Mark under a pile of pork and vegetables. It may not have been very respectful to the Evangelist, but it worked well with the customs officials. Cries of “khinzir” (the Arabic word for pig) — considered unclean for Muslims as for Jews — cleared the decks.

All was not smooth sailing after this. A mighty storm arose as the grave robbers left Alexandria en route to Venice. An apparition of St. Mark came to the rescue, guiding the Venetians through the tempest. The miracles were piling up even before the saint’s remains made it to their new home – minus the head, which seems to have stayed in Alexandria. Once the remains reached Venice they were initially kept in a more low-key manner than might be expected of such a trophy. Having received the body of St. Mark, Doge Giustiniano kept it quietly in his palace. On his death, the doge’s widow was instructed to build a church in which to house the saint. This was the first version of what later became the Basilica di San Marco. For almost a thousand years it remained the chapel of the doge’s palace; only in 1807 did the chapel become a cathedral fully under the control of a bishop rather than a doge. This was Napoleon’s decree, along with taking the four famous “horses of St. Mark” back to Paris. He didn’t try to loot the saint’s remains, though.

Fear of the precious relics being purloined again was always with the Venetians. According to a travelling French monk in 870: “The body of St. Mark is said to be deposited in the Doge’s stately rich chapel in a secret place, that it may not be stolen, under one of the great pillars.” There was considerable concern when the chapel was rebuilt in 1063 and no sign of the saint could be found. It wasn’t until 30 years later that, according to legend, St. Mark’s arm emerged from one of the old pillars, indicating where the rest of his remains were hidden.

After this, the body was joyously placed in a sarcophagus in the crypt below the high altar. It has been a place of pilgrimage ever since. One of the most frequent visitors is the writer of the latest book on the life St. Mark. British pilgrim extraordinaire Serena Fass is now 80 years old and one of the greatest authorities on La Serenissima – the nickname for Venice the author shares. This book, like all her other publications, is exceptional for bringing together the Catholic Church and its Middle Eastern counterparts, much as Venice did for many centuries. It is available only through Aid to the Church in Need, one of the Catholic charities most active in assisting with the plight of persecuted Christians throughout the world.