This new musical depicts an Austrian priest’s ministry in China 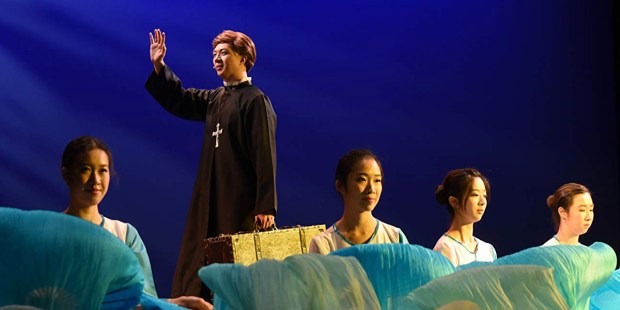 The show was produced by the Society of the Divine Word, the same order to which St. Freinademetz belonged.

A new musical about the life and works St Joseph Freinademetz has been met with critic acclaim and is now available to stream on YouTube. The work, St. Joseph Freinademetz: The First Saint to Ever Serve in Hong Kong, follows the story of the Austrian priest’s journey to China in the late 19th century, where he began his ministry as a Society of the Divine Word missionary.

St. Frienademetz taught that “love is the only language that everyone understands,” and it seems fitting that his life would be put to music, an equally universal language that can unite cultures under a single melody.

The two-hour show is sung in Cantonese with English subtitles, but UCA News reports that it has been translated into 20 different languages, in a sign respect for the polyglot saint. On the YouTube channel, you can find other translations, such as Japanese, Korean and German.

The show was produced by Father Tan Leitao, a fellow missionary of the Society of the Divine Word, the largest Roman Catholic order that focuses on missionary work. Earlier this year, at the 2019 Alaska International Film Awards, the musical won a Denali Award, and it was awarded an honorable mention in the 2019 Gabriel Awards (CPA).

St. Frienademetz traveled to China in 1879 with his friend Johann Baptist von Anzer. The saint established a chapel on the island of Yim Tin Tsai, where he learned the Cantonese and Hakka dialects and began to dress as a native Chinese. For nearly 30 years he was an active and effective evangelist, until his work with the sick during an outbreak of typhus saw the saint stricken with the illness that claimed his life.

Watch the full length musical below: