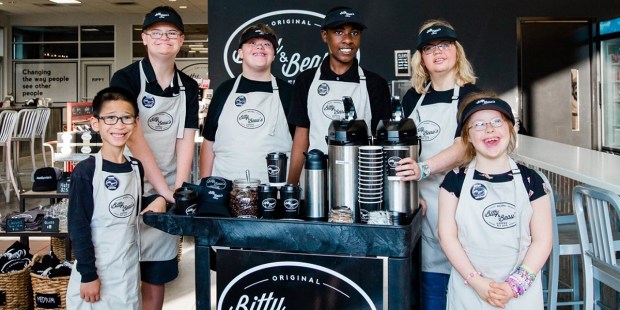 As Bitty and Beau’s Coffee grows, so does its important message of inclusivity for those with intellectual or developmental disabilities.

You might have heard of Bitty and Beau’s Coffee in North Carolina, also known as “The Happiest Place in Wilmington.” It’s the coffee shop founded by Amy Wright and her husband that is unique for its hiring policy: exclusively employing people with intellectual and developmental disabilities, such as Down syndrome, cerebral palsy, and autism. The results are delicious drinks served by a very happy and accomplished team.

She's his biggest fan. He now has a job because she believed in him. #morethanacupofcoffee pic.twitter.com/kPiJ7focyx

The Wrights initially found inspiration in their coffee shop venture from their kids, Bitty and Beau, who both have Down syndrome. With a significant 80% of people with intellectual and developmental disabilities not having a job, the couple knew they could do something to try to address this disturbing statistic.

“It hit me like a lightning bolt: a coffee shop! I realized it would be the perfect environment for bringing people together. Seeing the staff taking orders, serving coffee — they’d realize how capable they are,” Amy explains in a report by My Positive Outlooks.

After starting out in a 500-square-foot location with 19 employees in Wilmington, the coffee shop became very popular with its customers, requiring a move to a premises 10 times bigger, with a staff of 40. Thanks to its two managers — who both hold degrees in special education — Amy reports that the customer service is just as quick as in other coffee houses and that if anyone does need help there’s always someone to step in and lend a hand.

With such success the Wrights opened another shop in Charleston, South Carolina, in 2018, employing a further 80 willing workers. And while the shop itself gives employment opportunities to these more vulnerable members of society, Amy also explained the benefits to those who frequent the coffee shop:

Creating this has given people a way to interact with people with disabilities that (they) never had before. This is a safe place where people can test the waters and realize how much more alike we are than different. And that’s what it’s all about.

And not only have their efforts created some very happy and proficient baristas, Amy also received the 2017 CNN Hero of the Year Award, with the winnings of $100,000 going towards her project. To top this off, Bitty and Beau’s Coffee gained national recognition when it became the Rachael Ray Show’s official coffee in 2018.

Have you tried our coffee? After @rachaelray did, she decided to make us the OFFICIAL COFFEE of the @RachaelRayShow SHOP OUR BEANS ONLINE https://t.co/mMfy6eiv06 pic.twitter.com/iTXqYNSePy

With such positive responses, the Wrights also opened a further coffee shop in Savannah, Georgia, in January. And there seems no stopping the Wrights, who plan to open further shops this year.

While their story is proof of just how much our children can inspire us to be the very best of ourselves, Amy wants to spread her message further, hoping other businesses will also join in her initiative and hire those who don’t fit the usual criteria, but who have that little something special to bring to the workplace — just like Katie, making her first-ever frappe in this joyous video that’s gone viral below!

Read more:
Why we should welcome children with Down Syndrome