"The elements that will be rebuilt must meet the purpose for which the building was erected," he said.

Msgr. Francesco Follo, Permanent Observer of the Holy See to UNESCO, took part in a session of the Committee on World Cultural and Natural Heritage held in Baku, Azerbaijan, on July 4. Invited to speak, he conveyed the wishes of the Holy See concerning the reconstruction of Notre-Dame Cathedral, ravaged by a fire on April 15.

“Let us hope the Cathedral of Notre Dame will, with the help of everyone’s work of rebuilding and volunteering, become again what it was: the beautiful jewel-box in the heart of the city, the outward sign of the faith of those who built it, the mother-church of the diocese, and the architectural and spiritual inheritance of Paris, of France, and of the world.”

Centrality of the cultural dimension

For the representative of the Holy See at UNESCO, it is obvious, but it is necessary to remember: the planned restoration and reconstruction work must highlight “the central character of its cultural dimension.”

“It is crucial to safeguard this significance,” he insisted, stressing the interdependence and connection of religious life with worship and the buildings where worship takes place.

“The elements that will be rebuilt must meet the purpose for which the building was erected. Indeed, the form preserves and transmits its beauty only if it adheres to its purpose, so as to preserve the legibility of its identity,” he went on to argue. 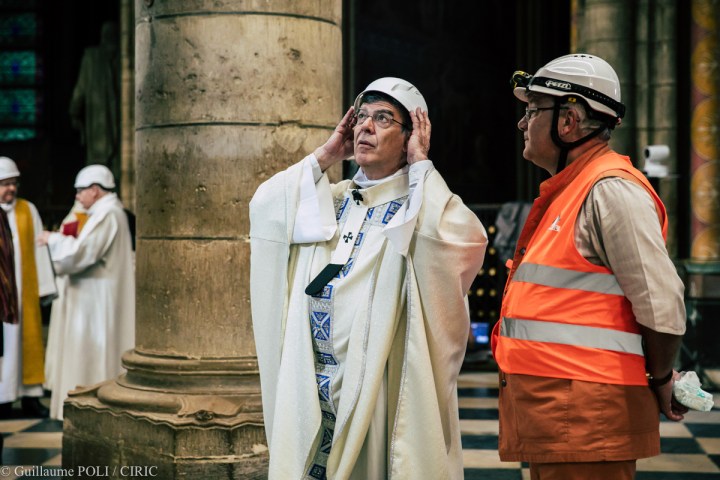 These words are a reflection of the many questions that remain concerning the restoration of Notre-Dame de Paris in the aftermath of the terrible fire of April 15. A few days after the disaster, Emmanuel Macron announced his intention to rebuild the building within five years and his promise that “a contemporary architectural gesture” could rise from its ashes.

This announcement has given way to some outlandish proposals outcry from experts in historic preservation, and raging debates in the press and Parliament over the future of Notre-Dame and the role the diocese of Paris must play in its reconstruction. For example, in an interview with L’Opinion on June 17, Jean-Philippe Hubsch, Grand Master of the Grand Orient of France, said that “this national historic monument is a place of culture. We do not see it as a place of worship.”

The answer of the Holy See is clear, as its diplomat, was able to convey the wish, that the cathedral Notre-Dame of Paris be returned to believers, non-believers and future generations, in accordance with the principle according to which “the safeguarding of the cultural heritage, including its fundamental religious dimension, is an essential condition for its valorization.” It’s a place of culture certainly, but a place of worship above all.