Tired of your teen’s attitude? Here are 3 steps to help them change 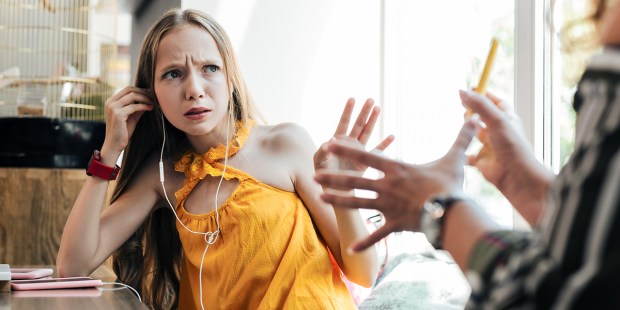 Teenagers may seem like awkward almost-adults, but they need to be parented as thoughtfully as toddlers.

My 13-year-old daughter is teenaging so hard this summer. The newest manifestation of her adolescence is her tone — pugnacious, rebellious, and harsh. I find myself constantly admonishing her to “watch your tone,” so much so that it’s annoying even to me.

Her response is as predictable as my warning …”I don’t have a tone,” she says, in the same sullen tone. “Yes you do!” I respond indignantly. “You’re using it right now!”

In the past few weeks, I’ve started to wonder if, in fact, she genuinely doesn’t realize just how disrespectful her tone of voice is … and why tone is so important in the first place. So I decided to implement a new strategy. Instead of giving her a vague order to “change your tone,” I decided to be more direct and explicit about why tone matters, and how she can change it. Here’s my 3-step plan to stop admonishing, and start correcting.

Inflection is a vital part of communication. Teenagers understand this enough — subconsciously, at any rate — to wield inflection like a sledgehammer, yet they are sometimes genuinely surprised by the fact that other people (read: adults) also understand the meaning of inflection.

So when my daughter says “O-kay” after I tell her to work on her summer Latin, I’ve begun pointing out the specific inflection she’s putting on the second syllable, and what that inflection communicates. Sometimes it’s like talking to a toddler — I’ll say, “do you hear the difference when I change the inflection in this one word?” Then I’ll give her three different examples of “okay,” with various inflections … the final one is usually identical to her initial response. I’ll ask her to name the emotion communicated by those inflections, and then ask if she can understand why I want her to change the way she’s saying it.

She rolls her eyes and gets impatient during this little exercise, but it works. She’ll change her inflection by the end, even if just to end the lesson … but her attitude invariably changes as well. Speaking of attitude …

Like most teenagers, my daughter will often protest her innocence by repeating the words she said and asking how that can possibly be objectionable. I always start with the tone of voice, but sometimes I’ll remind her that communication is not just the words we use and the tone we say them — body language is also a vital aspect of communication.

So when she juts one hip out and throws a response over her shoulder while rolling her eyes, that sends a clear message. Even if her tone is neutral and the words themselves positive, her body language is sending a completely different message. If she’s being particularly prickly I like to give her overly dramatic examples in ways that I know will make her laugh and pull her out of her petulance a bit.

The last part is the most important, and also the hardest. It requires taking myself out of the emotional reaction I feel enough to patiently identify it, out loud, for her. Tone is more important than the actual words people say. We remember how people make us feel, though not necessarily the words they say. So even though it’s hard, I try and tell her exactly how her tone and attitude is making me feel.

For example, when I ask her to clean her room after I’ve spend the morning taking her to visit friends and get lunch and she responds with annoyance, I have to take a deep breath and step outside of my own irritation. Then I tell her exactly how her communicated unwillingness makes me feel — unappreciated, taken for granted, disrespected.

Like most teenagers, she’s a good kid with a genuinely good heart. She doesn’t take me for granted, so when we get to this point she will inevitably explain that she didn’t mean it like that, apologize, and then go clean her room with a much more gracious attitude.

Teens and toddlers are similar in many ways. Everything is changing so rapidly for them that they often get caught up  in the swirl of hormones and emotions. They need us as parents to anchor them and bring them back to reality — even if it means walking them through exactly what they’re doing, and why they shouldn’t do it. So don’t be afraid to walk your child through the details of their behavior, even if it means getting vulnerable. Not only will they be more apt to understand what they’re doing, they’ll also be more likely to stop doing it.