Is baptism the same as christening? 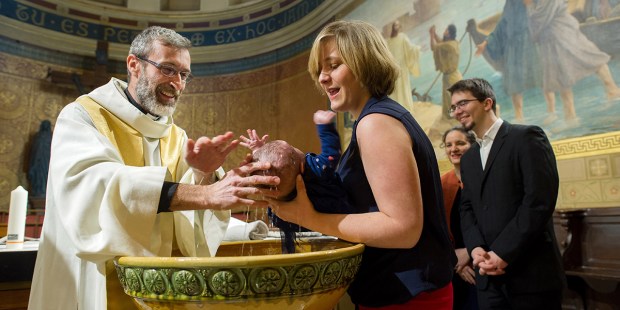 The words are often used interchangeably, but there are a few differences.

In the English-speaking world, two words are often used to denote one of the primary sacraments given to the Church by Jesus Christ.

Many use the word “baptism” when talking about the pouring of water upon a child or adult to initiate them into the life of the Church.

On other hand, the word “christening” is sometimes used in different parts of the English-speaking world.

What is the difference?

The word “baptism” comes from the Greek baptizein, meaning to “immerse” or “dip” in water. This refers to both the sacrament and the act of baptizing. The Catechism of the Catholic Church explains how, “The essential rite of Baptism consists in immersing the candidate in water or pouring water on his head, while pronouncing the invocation of the Most Holy Trinity: the Father, the Son, and the Holy Spirit.”

While its true that many use the word “christening” to refer to the act of baptizing, the word’s definition has changed over the years.

The word “christening” dates back to the 13th century, and literally means “to make a Christian.” In this sense it refers to the sacrament of Baptism, which is the first step in the process of Christian initiation.

Over time this word has changed in use and is primarily used today in reference to the act of giving an infant a Christian name. The giving of a Christian name is part of the rite of baptism, but is only a prelude to immersion into the water.

“Christening” is most often used in Anglican traditions, while “baptism” is more widely used in Roman Catholicism. In the end, both words are similar in definition, but are often used in different cultural contexts.