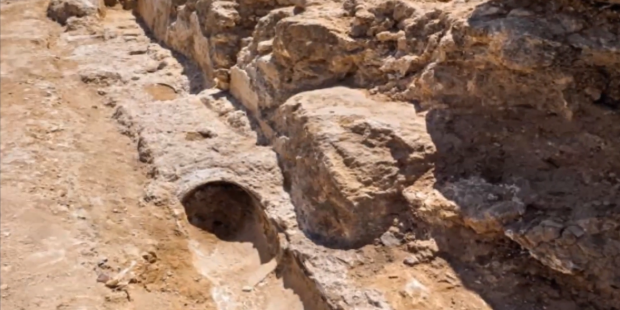 This water source was still in use up until the 20th century, when it was replaced with a modern, electric system.

During a recent effort to construct a new sewage line in Jerusalem, workers unearthed part of an ancient aqueduct, built more than 2,000 years ago. While aqueducts are known for their beautiful arches which stretch on for miles to bring water from a source to a city, the construction workers discovered a “lower aqueduct,” or a water passage that was buried underground, to be less intrusive to a city.

Resembling a pipeline, or maybe even a gutter, this lower aqueduct dates as far back as the Hasmonean dynasty (140 B.C. to 37 B.C) and precedes the reign of Herod the Great. It is quite possible that when Jesus came to Jerusalem, he drank water which was brought in on this aqueduct.

Live Science reports, the aqueduct, which was measured to be about 13 miles long, fed from the En Eitam spring near three ancient reservoirs known as Solomon’s Pools, roughly three miles from the city. The water traveled down a gentle slope in order to provide a replenishing source of water for drinking and the carrying away of waste.

Ya’akov Billig, director of the aqueduct excavation with the Israel Antiquities Authority, said in a statement that the aqueduct provided water for Jerusalem for 2,000 years, but there were renovations to the water system:

“At first, the water was conveyed inside an open channel, and about 500 years ago, during the Ottoman period, a terra cotta pipe was installed inside the channel in order to better protect the water,” Billig said.

That it was a primary source of water for so long explains why it was kept so well over the last two millennia. It continued to serve the people of Jerusalem until about 100 years ago, when the city switched to an electrically operated water-distribution system.

In a video by the Israeli Antiquities Authority, archaeologists explain that the Jewish people used water for more than cleaning, drinking, and waste management. They required sources of what they called “living water” or water that comes from a natural source such as rain and streams for ritual cleansing. The aqueducts provided such water, as it was all fed by streams and storms.

For more images, watch the video below.