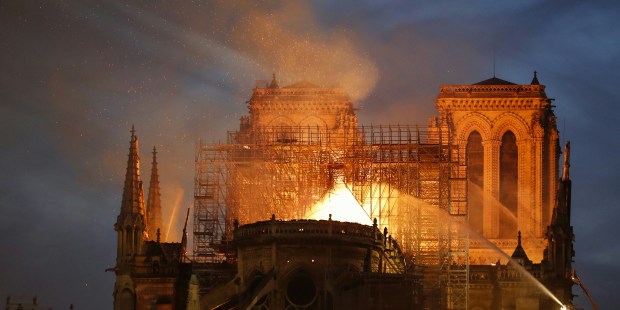 April 15 fire could have set off chain reaction bringing entire church down.

The Cathedral of Notre Dame came closer to totally collapsing in the April 15 fire than people may have realized, a New York Times investigation has revealed.

Were it not for the bravery of one fire team, which rushed into the twin towers in front of the cathedral, the fire would have set off a chain reaction bringing down the 850-year-old walls of the church.

Based on scores of interviews, the Times traced the fire’s progress beginning with the first alarm of a complex smoke detector system and the missteps of employees that wasted precious moments and allowed the conflagration to spread quickly.

The fire broke out in the cathedral’s attic, where ancient timbers held up the church’s roof. An ongoing investigation still has not pinpointed the cause, but the age of the wood and its dryness, coupled with the fact that Notre Dame decided not to install fire walls or sprinklers, meant that the attic could quickly turn into a raging inferno. In the end, the roof was totally lost, along with the iconic spire. But most of the vault was preserved, as were the walls and the famed stained-glass windows.

What worried fire officials during the blaze was that prevailing winds were blowing flames into the north tower in the front of the church. An interior wooden framework held up a series of large bells, and if these fell, they might very well have acted like wrecking balls, bringing down the tower and causing the neighboring south tower to fall as well. The double collapse very likely would have caused the rest of the cathedral walls to fail.

As the fire department was not called for a full half hour after the smoke was first detected, firefighters had a very limited window to make decisions.

“That Notre-Dame still stands is due solely to the enormous risks taken by firefighters in [the] third and fourth hours” after the fire’s beginning, the Times said.

By 8:30 that evening, after the spire collapsed and it was evident that the attic fire was out of control, Gen. Jean-Claude Gallet, the head of the Paris fire brigade, told city officials gathered at police headquarters that he was directing his brigades to focus on the north tower.

“At that point, it was clear that some firefighters were going to go into the cathedral without knowing if they would come back out,” said Ariel Weil, the mayor of the city’s Fourth Arrondissement, home to the cathedral.

At the command post, Master Sgt. Rémi Lemaire, 39, suggested that they could go up the stairs in the southern tower, where he had been earlier in the fight.

They could carry up two additional hoses, he said, that could be plugged directly into a fire truck. That would give the team more water pressure than the leaking riser could muster. And then from there, the firefighters could enter the blazing northern tower.

It was a high-risk strategy. …

Sergeant Lemaire had already seen the perils that the northern tower held earlier that evening. In the time it took to decide on the new plan, things only got worse.

“We were at first reluctant to go because we weren’t sure we’d have an escape route,” he recalled.

A group of firefighters from a neighboring suburb refused to go, but another team said it would do it.

They broke a gate, and as they went inside the northern tower, found parts of a wall and the floor on fire. They climbed a set of stairs to the height of the bells. From there, they could douse the flames.

One firefighter almost fell through the cracking steps — but by 9:45, they had the flames under control.