Witness the most incredible festival in all of New York – Festa dei Gigli!

The strength of the "lifters" is tested as they carry a 7-story high tower through the streets to celebrate a great saint.

Early Sunday morning as the sun began to climb its way across the blue sky, bringing its rays to fall on the narrow streets of Brooklyn, residents took to the streets to set up for what is renowned as the “Best festival in New York.” The still air filled with the aroma of sausage and peppers and bracciole even before most of the neighbors took their first sip of coffee for the day. 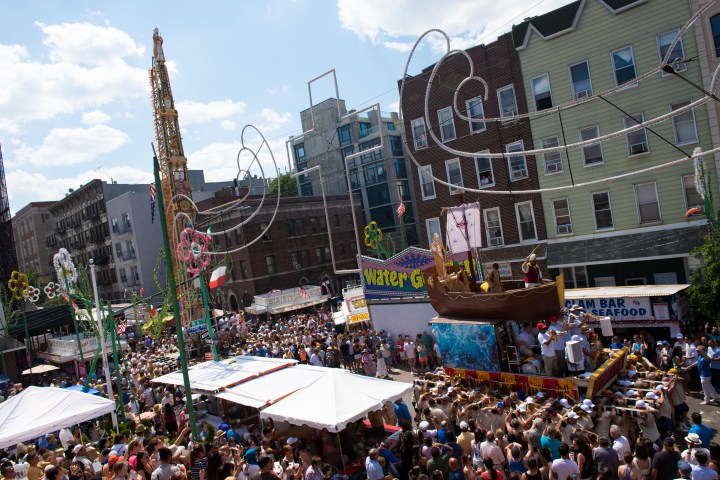 The festival honors Our Lady of Mt. Carmel and St. Paulinus of Nola, and has all the hallmarks of a traditional Italian-American street festival, but with one jaw-dropping addition — the Giglio, which is a 75-foot tall, four-ton tower that is carried and “danced” by over 160 men through the streets surrounding the church of Our Lady of Mt. Carmel. And if that weren’t enough, another “float” weighing two tons, designed to resemble the ship that St. Paulinus traveled on, is also paraded by over a hundred men. The climax of the event occurs when the two structures meet before the church and are turned to face the entrance.

“What are we doing? We’re expressing our Faith! And to some it may look strange, and maybe it is! And today we celebrate this, because we celebrate God’s presence …” proclaimed Monsignor Jamie Gigantiello to a church filled with “lifters” and their families and friends during the opening Mass on “Giglio Lift Sunday.”

The tradition, dating back to the 5th century in Italy, commemorates the return from captivity of the beloved St. Paulinus, Bishop of Nola. The story goes that in a raid against his town in the early 5th century, barbarians had captured a large group of townspeople. Paulinus stepped forward and offered himself to the captors in place of one of the parishioners. They were taken to the coast of Africa, but when one of the sultans had learned of Paulinus’ act of heroic charity, he returned Paulinus and the others to their home aboard one of his ships. Upon their return, the local townspeople greeted them with lilies, which in Italian is “gigli.” The “modern” festival portrays the ship, complete with “Turks” and the Giglio (“Lily”) tower, which represents faith, God’s grace and the lilies of homecoming.

As the Mass let out, the streets teemed with spectators of all ages and ethnicities to see this incredible feat of strength amid a raucous and joy-filled community. Gathering beneath the towering structure under the sweltering heat of the midday sun, the “Capo” and his lieutenants scream directions to the lifters to keep them all in sync. And as the massive structure is raised from the ground skyward the band sitting aboard the Giglio begins to play, and sounds of cheering, screaming, and traditional Italian folk music fills the streets of Williamsburg in a celebration of faith unlike any other, in a community that still holds fast to faith and tradition as it’s done for 132 years.

The festival runs through July 21, so if you’re looking for a unique experience along with some of the best Italian food in Brooklyn, this might be for you. For more information visit: OLMC Feast.