Did the Virgin Mary have a sister? 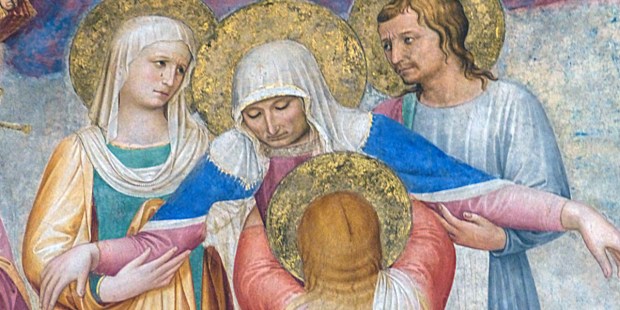 The Bible gives us some clues, but is relatively silent regarding Mary’s siblings.

The New Testament contains relatively little information about the the Virgin Mary, not even mentioning her parents by name. Most of the information we have is from extra-biblical writings from the first few centuries of the Church, and is not completely reliable.

However, the Bible does give us a passing reference to a potential sibling of the Virgin Mary.

Among those standing next to Jesus’ cross on Mt. Calvary is a “Mary of Clopas,” whom St. John identifies as Mary’s sister.

[S]tanding by the cross of Jesus were his mother, and his mother’s sister, Mary the wife of Clopas, and Mary Magdalene. (John: 19:25)

This is the only mention of her in the entire Bible and biblical scholars have had differing views as to the correct interpretation.

For example, according to the Catholic Encyclopedia, “St. Jerome would identify this Alpheus with Cleophas who, according to Hegesippus, was brother to St. Joseph. In this case Mary of Cleophas, or Alpheus, would be the sister-in-law of the Blessed Virgin, and the term ‘sister,’ adelphe, in John 19:25, would cover this.”

Others have tried to identify Mary of Clopas as the mother of St. James the apostle. This would be consistent with the Gospels of Matthew and Mark, who identify a different Mary at the foot of the cross.

There were also women looking on from afar, among whom were Mary Magdalene, and Mary the mother of James the younger and of Joses, and Salome. (Mark 15:40)

This doesn’t rule out that these two Marys are the same person, both the sister (or sister-in-law) of the Virgin Mary and the mother of St. James.

Whether the Virgin Mary had other siblings is not known. Tradition claims that Sts. Joachim and Anne experienced infertility before conceiving the Virgin Mary, though it does not comment on whether they had other children after giving birth for the first time.

The Bible doesn’t give us all the details regarding the Virgin Mary’s family, but that wasn’t necessary at the time it was written. Many in Israel knew her family and didn’t need every detail laid out. It is a good question, one that won’t be fully revealed to us until the end of our short lives here on earth.

Read more:
Did the Virgin Mary serve as Elizabeth’s doula?