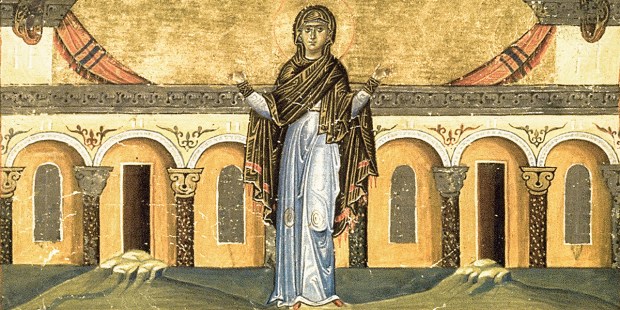 When night falls, it’s somehow much easier to sin. We are tempted to think that the darkness “hides” our sin and that God does not see what we do.

This is exactly what St. Theodora believed, honestly thinking that the darkness would hide her from God.

St. Theodora lived in Alexandria during the 5th century and tried to live honestly and close to God. She was married to a good husband, who was similarly a faithful Christian.

The devil recognized the holiness of St.Theodora and sent her many temptations. He even led another rich man to send her gifts in hopes that she would eventually have sex with him.

At first the temptations didn’t do anything, but then St. Theodora’s naive nature was overcome when another woman said to her, “God knows and sees everything that is done by day, but anything committed at dusk and sundown God does not see.”

She then gave in to the other man’s desires and had a “one-night stand” before daybreak.

The man left in the morning and when her husband returned from a trip, St. Theodora wept bitterly. She didn’t tell him what happened and when he was away, she ran to the nearest monastery.

Her life was most difficult, even seeing her husband on the road, though he didn’t recognize her. She was too ashamed to reveal herself to him and spent the rest of her life away from him.

When she died, her husband was inspired by God to come to the monastery and revealed to the abbot that “Brother Theodore” was in fact his wife. He then spent the rest of his life in the same cell that his wife occupied.

The story of St. Theodora reminds us that even saints can make mistakes. They were not always perfect individuals and their choices weren’t always the best. However, what sets them apart was their desire to fulfill God’s will and overcome their weaknesses to live a life of virtue.

The good news is that God will gladly receive us into his loving arms, just like the Prodigal Son that Jesus talks about in the Gospels. God is always there waiting for us, we simply need to turn away from our sin and run towards him.

St. Theodora’s tragic story also reminds us that night does not conceal our sins. A one-night stand may seem like the “right” thing to do in the moment, but when morning comes, the light of God shines on our sins and reveals the bad fruit that it bears.

Let’s learn from St. Theodora’s mistake and try not to make our own in the future. But if we do find ourselves in the morning regretting what we did the night before, run to the nearest Church and be reconciled to God. He is there waiting for you, ready to pick you up like a loving Father, setting you on the right path back to him.