On the anniversary of the moon landing, here’s why you should call on Mary, and pray for the Church 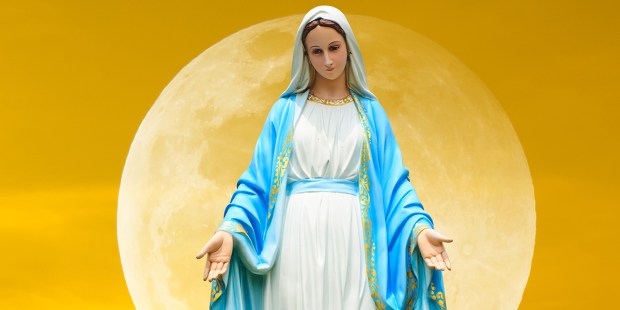 The “mysterium lunae” is a favorite image of spiritual writers.

As we mark the 50th anniversary of the “giant leap for mankind” and Neil Armstrong’s setting foot on the moon, we can use the occasion to remember that the moon is a beautiful symbol in our faith.

The moon and Our Lady

This was a favorite image of the Church Fathers and has also been used in modern times, for example by soon-to-be Blessed Fulton Sheen:

God who made the sun, also made the moon. The moon does not take away from the brilliance of the sun. All its light is reflected from the sun. The Blessed Mother reflects her Divine Son; without Him, she is nothing. With Him, she is the Mother of men.

The moon and the Church

Our Lady is herself an image of the Church and so the same light symbolism that ties Mary to the moon is also used to speak of the Church.

In fact, Pope Francis referenced this image right before his election as pope. He told his fellow cardinals:

The Church is supposed to be the mysterium lunae – the mystery of the moon is that it has no light but simply reflects the light of the sun. The Church must not fool itself that it has light of its own …

He was echoing an observation made in the Catechism (748):

The Church has no other light than Christ’s; according to a favorite image of the Church Fathers, the Church is like the moon, all its light reflected from the sun.

So to celebrate our stewardship and the “dominion” of creation as evidenced in the moon landing, let us call on Our Lady and say a prayer for our Church!

These prayers from Pope Pius XII can accompany us as we turn our eyes heavenward for the anniversary:

To you, O Mary, are known all the needs of your people and of the whole Church. Mother of Truth and Seat of Wisdom, dissipate the clouds of error which darken our minds.

O Virgin, fair as the moon,
delight of the angels and saints in heaven,
grant that we may become like you
and that our souls may receive a ray of your beauty,
which does not decline with the years
but shines forth into eternity.