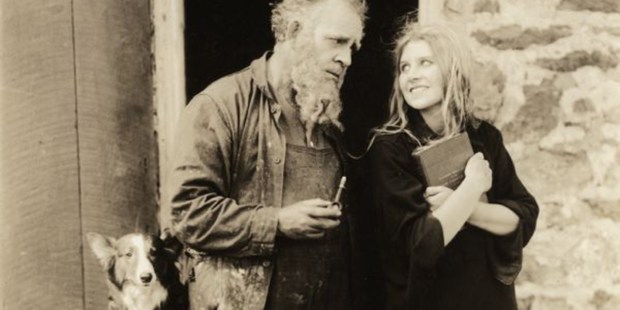 Hardship can lead to a new appreciation of the goodness in our lives.

[Spoiler alert: If you haven’t read Silas Marner and want to, you my want to postpone reading the article below.]

When he takes away what he once lent us, his purpose is to store our treasure elsewhere more safely and bestow on us those very blessings that we ourselves would most choose to have. – St. Aloysius Gonzaga

St. Aloysius Gonzaga’s words just about sum up George Eliot’s Silas Marner. A solitary miser, Silas Marner removes himself from friendship with God and man because of a betrayal. His story reminds us of the mystery of evil and our own experiences of hardship.

Marner is accused of stealing, set up by someone close to him in his faith community. He is then cut off from all relationships in his church and town, since reputation is everything. He has to leave home and all that is familiar to him and start over. He finds a small domicile far from his home town, safely apart from the rest of the world.

One evening he runs an errand in a nearby town and uncharacteristically forgets to latch his door. A crafty son of a local squire, down on his luck, happens by and handily finds Marner’s money buried under the floorboards. Returning home, Marner sets about the quotidian ritual of unearthing his subterranean treasure to spread out before him and count it. To his great horror, it’s no longer there.

“I’ve been robbed!” Marner yells as he burst into the local pub. This second injustice now brings him to the hearth of strangers—a place he had never trod. But the loss of the only thing he loves and the desire to possess it again brings him there.

What he doesn’t count on is that his neighbors — previously strangers to him — begin checking in on him with a caring word or small gift of food. He would have found these kinds of interruptions an annoyance in the past, taking him away from his work and his ordered life. But he begins to exhibit a “faint consciousness” that he just may be able to depend on others. “The fountains of human love and of faith in a divine love had not yet been unlocked” in him, Eliot writes, but the “sap was starting to flow.”

Since being robbed, Marner sometimes leaves his door open in the evening, hoping the gold will perhaps appear again as mysteriously as it left him. It does appear, just not as expected. At first, he thinks the gold he sees before his hearth is his own gold returned, but on closer inspection, he realizes it’s a child. A child! A beautiful girl with golden hair, asleep in front of the warm fire. An “unseen goodness” at work again in his life, Marner soon understands the child is a gift from God.

Unlike his previous treasure, which had “kept his thoughts in an ever-repeated circle, leading to nothing beyond itself,” his newfound treasure, whom he names Eppie, leads him into the world again. No longer directing his love solely to a thing, Marner loves someone. And the love between this adopted father and daughter was as God intends familial love to be—a kind of love that “blent them into one.”

At the end of the novel, Marner’s gold and the gold-thief are found at the bottom of his well, only a few feet from his front door. The stolen gold had been there all along, just hidden—bringing us back to St. Aloysius Gonzaga’s words.

Sometimes God allows a good to be taken from us, maybe unjustly … our livelihood, our community, our reputation. These setbacks can pervade our lives and we can wonder where God is or how a good God permits such evil. But it doesn’t mean He’s absent. And it doesn’t mean we should turn from Him, not allowing him, or anyone, into our brokenness. It may just mean that God has something to teach us, something we wouldn’t have learned otherwise, or something better in mind for us.

In Silas Marner’s case, perhaps the gold was permitted to be taken away so that his loves could be properly ordered. Once he becomes aware of the love he has for a human being, and for the God who gave him this precious gift, his love of money can no longer possess him. And when his money does come back to him, he sees it as a blessing not for himself to keep, but for Eppie.

Like Silas Marner, we are asked to trust in God’s providence, even when He allows things to be taken away—trusting He will bestow the blessings that are best for us to have.

Read more:
7 Books every Catholic woman should read this summer

Read more:
Summer reading: Our picks for books to take to the beach