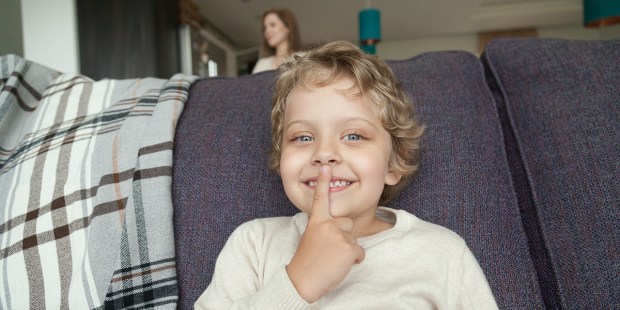 Peer pressure and secret-keeping is a normal part of learning social dynamics, but here’s how to steer it in the right direction.

Yesterday while I was folding laundry, my 6-year-old Lincoln came home from a bike ride with his older brother and a neighborhood friend. He walked into my room looking forlorn, so I patted the floor next to me and told him to come sit down. He climbed into my lap instead—not totally unusual behavior for this tender-hearted boy of mine. But then he buried his face in my chest and burst into tears.

They weren’t manufactured tears–they were full-body, uncontrollable sobs. I resisted the instinct to ask what was wrong and instead held him, closer, rocked him, and gradually helped him slow his breathing until the tears subsided. Then I asked what was wrong.

Of course, the tears started up all over again, but after a few repeat performances he was calm enough to say, “I’m not allowed to tell you. It’s a secret.”

Parents, y’all know the instant, cold knot of dread that accompanies the announcement that your child has a secret. This is my fourth time having a 6-year-old, so I knew enough not to go directly into interrogation mode. Instead, we talked a little about secrets, the purpose behind them, good secrets vs. bad secrets, and why it’s wrong and often dangerous to keep secrets from parents.

Finally, I gathered him close, looked him in the eye, and said, “Linc, I love you to the moon and back. I love you more than my own life, and it’s my responsibility to keep you safe. But I can’t keep you safe if you have secrets that you won’t tell me.”

He looked at me, eyes welling up with tears again, and said in a whisper, “I can’t.”

I decided to switch tactics and asked if he was afraid to tell me. He admitted that he was afraid his brother would be mad, so I promised him that as long as the secret wasn’t something dangerous, it would be safe with me. I wouldn’t tell anyone.

Finally, he told me. It was nothing serious or dangerous, just typical elementary-school grandiose imaginations, but my relief was palpable. I had, of course, been imagining the worst—and I’m so glad I adapted enough to try a new strategy with my fourth child.

If you’re struggling with secret-keeping, whether it’s with your first child or your fourth, here are some simple strategies to head it off at the pass, and hopefully help your kids open up if they are keeping secrets from you …

1
Talk about it early and often

If kids have heard from the time they were toddlers about the problems with secret-keeping, they won’t be blindsided by peer pressure when they’re learning to navigate social dynamics. It’s important to talk about the moral aspect of truth-telling vs. lying, but start these conversations by grounding them in reality. Tell your kids real-world, age-appropriate stories about how keeping a secret can cause emotional distress and sometimes even physical danger.

2
Set them up for success

Give your kids practical strategies for those inevitable peer-pressure moments. Especially in elementary school, kids will instinctively avoid the social fallout from saying, “I’m not allowed to keep secrets.” That’s okay—they’re learning social skills and they want to fit in with their friends. Help them find ways to noncommittally exit the conversation, but let them know that they won’t be in trouble if they agree to keeping a secret in the heat of the moment. Tell them they can trust you — then show them by respecting that trust. If the secret is something that needs to be addressed, do it in such a way that doesn’t put your child in the position of tattle-tale.

It’s hard to pay attention to our kids all the time. Life can be overwhelming, but it’s vital that you make an effort to be attuned to changes in mood, bids for attention and affection, and bouts of belligerence. All of these could be signs of guilt or emotional distress, so make sure you find a time and place to let your kids open up. Don’t interrogate or demand answers, or that trust you’ve built will be shattered. Be patient, be loving, and persevere—eventually the right time and right place will allow your child to let down those walls and open up to you. You don’t want to miss that moment because you’re distracted, so give them your full attention. It might take a while, but eventually they’ll respond in kind.

Like all virtues, teaching kids to be truthful can be tricky ground to maneuver, but don’t avoid it out of uncertainty. If you make discussions about truth and lies common in your house and give your kids a foundation of unshakable trust in you, you’ll all make it across that ground in the end.

Read more:
6 Tricks to teach kids humility (and to understand it ourselves)

Read more:
Why you should always say yes when your kids ask to help