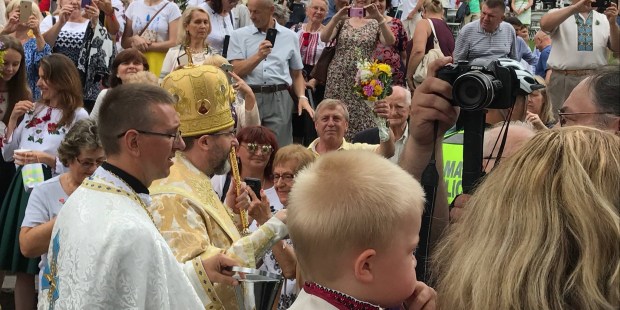 The year 1954 was designated by Pope Pius XII as a Marian year, the first in Church history. For the hundredth anniversary of the definition of the proclamation of the dogma of the Immaculate Conception of the Virgin Mary, the Marian year was to be filled with Marian-themed studies, cultural events, and charity and social gatherings.

In the village of Sloatsburg, New York, about an hour’s drive north of New York City, the chaplain of a girls’ high school suggested that the sisters who ran the school have a pilgrimage that summer to honor the Assumption of the Virgin Mary.

In the 65 years since then, the Holy Dormition Pilgrimage has seen thousands of visitors, each of whom has been touched in a profound way, according to one of the sisters who sponsor the event, the Sisters Servants of Mary Immaculate.

“I would say that people who attend—I believe everybody has their own miracle, their own experience of the Mother of God working through them, whether they go home with a sense of peace, or someone does experience a prayer that was answered,” said Sister Michele Yakymovitch, vice provincial of the Sisters Servants community in Sloatsburg. “I believe God answers every prayer, every desire of those pilgrims who attend who make a sacrifice to be there. And it’s a sacrifice because, whether it’s heat or in some years we’ve had torrential rain, or traveling a distance, it’s a sacrifice to come.”

“Since we are a Marian congregation it was truly an inspiration of our chaplain at that time, Fr. Basil Feddish, to hold something that would bring our people together,” said Sister Kathleen Hutsko, American provincial of the Sisters Servants, which has its roots in Ukraine. “In Ukraine there were always pilgrimages, and not so much in the U.S. at the time. It was decided to hold it around the feast of the Assumption, when more people could come.”

The event is always held on the weekend before the Aug. 15 feast. This year, it will be August 10-11, and the principal celebrant of the Sunday Pontifical Divine Liturgy will be Metropolitan Borys Gudziak of Philadelphia.

Since the Sisters Servants are a Byzantine community, the pilgrimage is named for the “Dormition,” the Eastern Christian term for the Assumption. Sisters have compared it to the major pilgrimage site in Ukraine, where a miraculous icon of the Mother of God has been venerated for centuries.

“Ukrainians have nicknamed this the American Zarvanytsia, because it’s the biggest pilgrimage in the United States for Ukrainian Catholics and Byantine Catholics,” said Sister Hutsko.

The Sisters Servants don’t have a miraculous icon, but they do have an icon of the Dormition in their chapel; a Dormition shroud made in Jerusalem that is carried in procession and left outside for veneration by pilgrims; a grotto that is similar to the one in Lourdes, and outdoor stations of the cross.

The weekend consists of liturgies, a candlelight procession, talks, and a healing service. Confessions are heard Saturday evening and all day Sunday in Ukrainian and English, and are also heard in Polish, Russian, Slovak, Spanish, and Portuguese most years. There is a supervised youth campout Saturday night. Some years, there has been an all-night vigil outside.

There is also a blessing of flowers and herbs, a tradition on the feast of the Dormition, and the blessing of cars and buses of departing pilgrims.

“Probably more so than anything else, [pilgrims receive] a sense of peace, a peace that comes from the natural atmosphere of the property, a peace that comes when you’ve gone to confession and communion,” said Msgr. John Terlecky, pastor of a Ukrainian Catholic church in nearby Spring Valley, New York. Msgr. Terlecky has been attending the pilgrimage since 1968, the year when Cardinal Josef Slipyj, who had spent 18 years in the Soviet gulag, presided at the pilgrimage.

Msgr. Telecky’s parish shuts down on the weekend of the pilgrimage because the event is so close. But it is far from simply a local pilgrimage. Myra Sowa, the daughter of Ukrainian immigrants, has been traveling to it for over 30 years from Central Illinois.

“I grew up with the sisters. They taught me in grade school at St. John the Baptist Ukrainian Greek Catholic Church in Detroit,” she said. “I get there before it begins and help prepare: weed flower beds, paint signs for parking, set up candles for the grotto, help in the kitchen, things that need to be cleaned or tidied up. The property is very peaceful. Just to walk the grounds and to pray. … The nuns are very welcoming; it’s like going to another home. The spirituality you get there with the blessing of the sick or the liturgies, to me it’s a great package.”

Kvitka Semanyshyn, whose parents also were from Ukraine, started going to the Dormition pilgrimage only in recent years because in the past her summers were taken up with trips to Ukraine, where she assisted with the underground Church.

“Ukraine had been under communism [for so long], yet people never lost their faith,” she said. “The underground Church, mothers and grandchildren always embed the faith in their grandchildren and children.”

Today, she is impressed with the facilities, the atmosphere, the procession and the pontifical Divine Liturgy, which is routinely celebrated by a number of bishops. “That’s quite an experience,” she said. “Then there’s the blessing of flowers and fruits; it’s a tradition … Pilgrimage makes a lasting memory and gives you stronger ties to your faith.”

The Sisters Servants began in 1892, when two priests convinced 22-year-old Josaphata Hordashevska to join them in founding a new religious community, which would minister specifically to the needs of ordinary people living in what was then known as Galicia, Austria-Hungary. Blessed Josaphata was beatified by Pope John Paul II in 2001.

The sisters came to Sloatsburg in 1941. The property where they’ve had their convent, retreat house, girls’ academy and now adult care home was originally built for William Pierson Hamilton, great-grandson of Alexander Hamilton, and his wife, Juliet Pierpont Morgan, daughter of J. Pierpont Morgan. The 40-acre property provides plenty of space for a large gathering.

Unfortunately, because of the lack of incoming vocations and the expenses of caring for an aging community, the Sisters have had to put much of the property on the market. But Sister Hutsko said the sisters will continue the Dormition Pilgrimage for as long as they are on the property.

Perhaps the words of Major Archbishop Sviatoslav Shevchuk (in photo above), head of the Ukrainian Greek Catholic Church, who celebrated the Pontifical Divine Liturgy at last year’s pilgrimage, had special resonance for the Sisters Servants. “Here on earth we are only pilgrims,” he told a gathering of an estimated 7,000. “As you came today on this pilgrimage, you were supposed to leave behind you everything that is not helping you to move in this pilgrimage.”