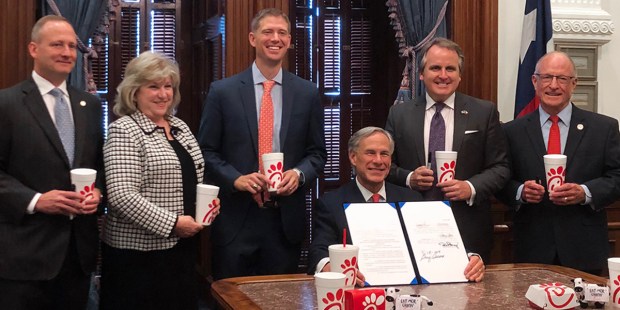 The law comes after Chick-fil-A was banned from the San Antonio airport due to the owners’ stance on the LGBT movement.

Texas Governor Greg Abbott has signed a bill that bans government entities from taking “adverse action” over an organization or individual’s affiliation to a religious organization — also known as the “Chick-fil-A law.”

Today I signed the ⁦@ChickfilA⁩ law in Texas.

And, had a great lunch.

No business should be discriminated against simply because its owners donate to a church, the Salvation Army, or other religious organization.

Although the law does not specifically mention “Chick-fil-A,” the famed chicken sandwich makers were the inspiration for the new regulation. Earlier this year, the City Council of San Antonio was settling concession contracts for vendors at the San Antonio airport, when they were found to have insisted that Chick-fil-A be left out of the contract due to their stance against the LGBT movement.

Chick-fil-A is well known for its owners’ firmly held Christian beliefs and practices. Most notably, they have donated millions of dollars to Christian based organizations and their restaurants do not open on Sunday.

Read more: How Chick-Fil-A Responded to the Orlando Massacre

San Antonio Express News reports that Councilmen Roberto Treviño and Manny Peláez both cited the company’s “anti-LGBT reputation” as reason enough to exclude the company from the airport. The proposal passed 6-4-1, however Councilman John Courage argued that the decision could have ramifications which could reach further than the cafeteria. He said:

“I’m just concerned that if we start picking and choosing based on social issues, then does that mean we don’t want to let a certain medical group into the Medical Center? I think that is going down a very wrong path for this city to take.”

The news reached Texas Attorney General Ken Paxton, who sent word to the San Antonio city council that he will be opening an investigation of the decision. CBS Local has Paxton’s statement:

“The City of San Antonio’s decision to exclude a respected vendor based on the religious beliefs associated with that company and its owners is the opposite of tolerance,” Attorney General Paxton said. “The city’s discriminatory decision is not only out of step with Texas values, but inconsistent with the Constitution and Texas law.”

CBS also notes that Paxton sent a letter to Secretary Elaine Chao of the United States Department of Transportation, suggesting she open an investigation for a possible breach of Transportation Department regulations, which also restrict the banning of an organization based on its relgious beliefs.

The Washington Examiner reports the new law is already under scrutiny by the Democrats of the Texas legislature, who say the bill “invites descrimination.” The bill reads:

“Notwithstanding any other law, a government entity may not take any adverse action against any person based wholly or partly on a person’s belief of action in accordance with the person’s sincerely held religious belief or moral conviction, including beliefs or convictions regarding marriage.”

There have been no reports as to whether or not Chick-fil-A will be included in the airport contracts after all, but the new law in place should prevent discrimination on religious grounds n the future.