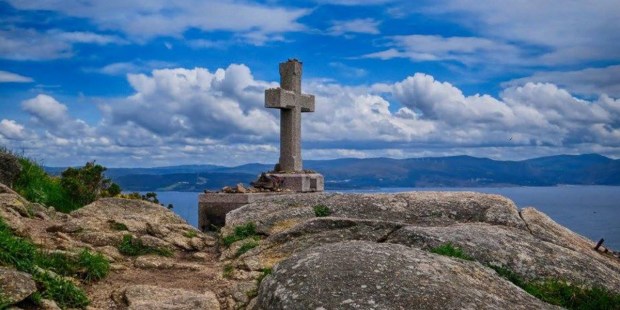 According to local tradition, St. Francis walked from Italy to Spain on the famous Camino de Santiago pilgrimage route.

Among the many famous pilgrims who have walked to the burial site of St. James the Apostle in Spain is reportedly St. Francis of Assisi. It is said that in 1214 St. Francis embarked on a long journey to Spain early on in the development of his new religious order.

The legend of St. Francis’ pilgrimage is largely based on a passage from The Little Flowers of St. Francis of Assisi, a popular account of his life written during the 14th century. It is even claimed that St. Francis founded multiple monasteries on his return journey.

In the first beginning of the Order, when there was as yet but few brothers and no convents established, St. Francis went, out of devotion, to San Giacomo di Galicia, taking with him Brother Bernard and one or two other brothers. As they traveled on together, they met by the way a poor sick man. St. Francis, moved with compassion at the sight of his sufferings, said to Brother Bernard: “My son, I will that thou stay here, and take care of this sick man.” And Brother Bernard, meekly falling on his knees, received the order of his revered father and remained behind, whilst St. Francis and the others proceeded to San Giacomo.

On arriving there, they spent the night in prayer in the Church of St. James, and God revealed to St. Francis how he would found many convents all over the world, and how his Order would increase and multiply into a great multitude of brethren. After this revelation St. Francis began to found convents in that country

This account is questioned by most historians, as it may have been based on second-hand oral traditions rather than any historical research.

Writer Nora Hamerman for the Catholic Herald also gives another story that has been passed down over the years regarding St. Francis’ pilgrimage to Spain.

Tradition says that a poor local family hosted St. Francis during his pilgrimage in 1214. When Francis asked the family’s father to build a monastery he replied that he had no funds. The humble man from Assisi led him to a treasure buried at a nearby hermitage. A Benedictine monastery gave them the land to build the monastery in exchange for an annual basket of fish, which the friars continued to remit until the end of the 18th century.

Regardless of its veracity, various sites along the Camino are associated with St. Francis, and there even exists a Camino di Francesco that follows a path similar to what St. Francis might have taken during the 13th century.

Considering the poverty and humility of St. Francis and his desire to do penance for his sins, it is possible that St. Francis did walk the Camino. Not all of the stories may be true, but some of them could provide evidence of the saint’s rigorous pilgrimage.

St. John Paul II reminded us of the spiritual impact of pilgrimages when he visited Santiago de Compostela in 1988. His reflection reveals some of the possible motives St. Francis may have had and encourages us to seek our own pilgrimage of faith.

Pilgrimage has a very deep spiritual significance; it can represent in itself an important form of catechesis. The Church — as the Second Vatican Council reminded us — is, indeed, a people of God on the march, “in search of a future and permanent city” (cfr. Lumen Gentium, n. 9).

In the world today there is a revival of the practice of going on pilgrimage, especially among the youth. Today, you are among those more inclined to experience a pilgrimage as a “way” to interior renewal, to a deepening of faith, a strengthening of the sense of communion and solidarity with your brothers and sisters and as a help in discovering your personal vocation …

During the pilgrimage days, try to recapture the spirit of the pilgrims of old, courageous witnesses to the Christian Faith. As you journey on, learn to discover Jesus, who is our Way, Truth and Life.