The Church is everywhere in Malta

St. Paul was shipwrecked off the coast of Malta in the year 60, and left behind an island that, to this day, is inhabited by some of the most passionate and unabashed Catholics in the world.

Malta is one big church. You’ll have to go and see for yourself, and, as a former resident, I think you’ll be glad you did. For those interested in the rich Catholic history of this Mediterranean island nation, here is a guide to help you plan your visit.

On his way to trial in Rome in the year 60., St. Paul was shipwrecked off the northwestern coast of Malta and spent the winter there, miraculously surviving a deadly snakebite, which made him a “god” to many. He converted the island’s governor, Publius (Malta’s first bishop and first saint), healed the sick and won souls for Christ. To this day, the Maltese are among the most passionate and unabashed Catholics in the world. The country has more than one church per square kilometer: 732 of them. The smallest of its islands, Comino, has a whopping one chapel, but only four residents, so it’ll do. 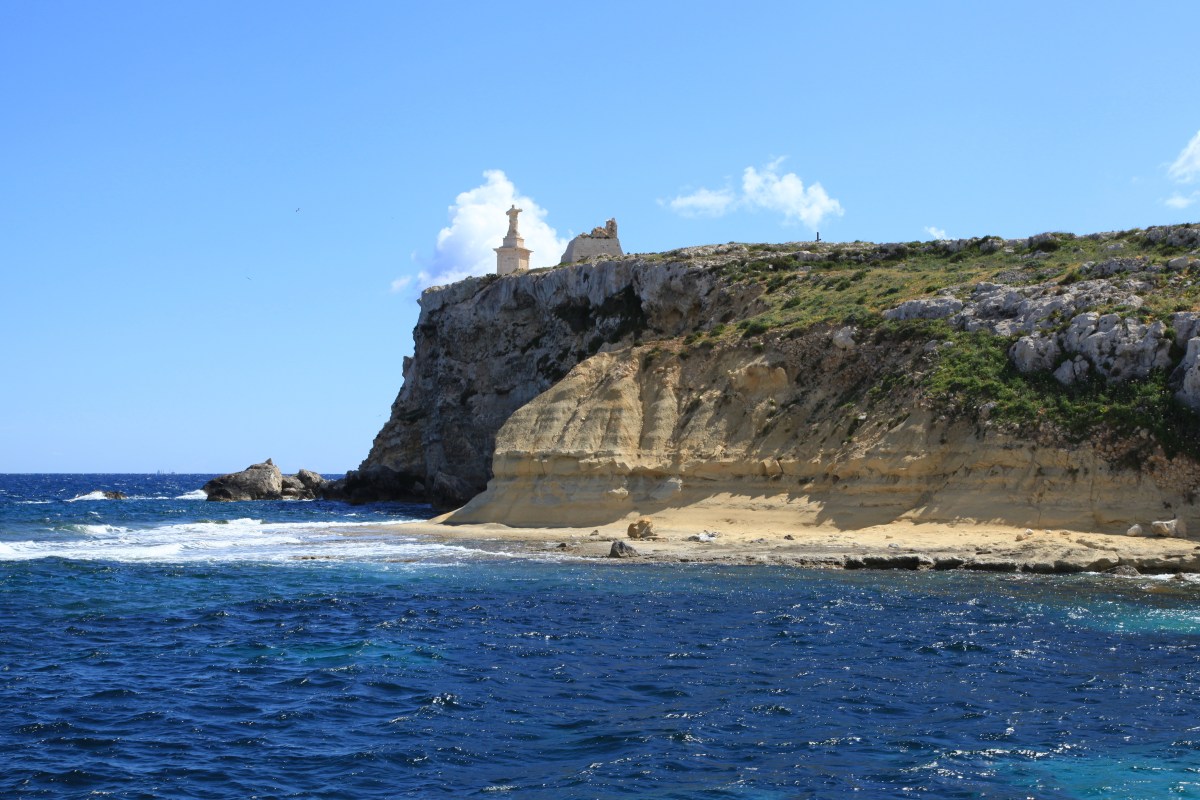 You have two years to see every church, at one per day, or 14 years if you just go Sundays. I’ll help you get started, with four standouts and a humbler village church for good measure. We’ll start where most visitors do—in the capital, Valletta.

The dramatic front façade of one of the island’s oldest and most beloved churches towers over a very narrow street; you’ll be hard-pressed to squeeze it all in one photo. There are two relics inside: a wristbone of St. Paul, and a piece of the column on which he may have died at the presumed site of his martyrdom in Rome. If you plan your visit for the Feast of the Shipwreck of St. Paul (February 10), you’ll see the titular statue of St. Paul carried through the streets of Valletta with all the bells and whistles; the streets will be thickly carpeted in confetti. Maltese Catholics love to party!

The architectural footprint of the Order of the Knights of St. John is especially large in the capital. A short walk up the hill from St. Paul’s Shipwreck Church stands one of their masterpieces.

2. The Co-Cathedral of St. John the Baptist (Valletta)

Built by the Knights between 1573 and 1578, this was the Order’s conventual church until their expulsion, and became a Co-Cathedral with St. Paul’s Cathedral in the old capital of Mdina in the 1820s.

Catholic Malta and the Knights have a storied relationship. With its splendid natural harbor and strategic position in the Mediterranean, Malta was irresistible to invaders: Phoenicians, Arabs, Roman, and the Ottomans. The Knights were given Malta in 1530 (as a vassal state of Sicily) and ruled there for 268 years. They famously repelled the Turks in 1565, but were expelled in 1798 when Napoleon captured the islands. Britain sent France packing in 1800, beginning 164 years of British rule. As a key outpost for the Royal Navy, Malta was one of the most heavily bombed places in the world in World War II.

The understated façade of St. John’s Co-Cathedral belies a lavish interior: full-blown ecclesiastical bling, not a square inch left untouched by paintings, sculpture, marble, tapestries, the prized “Beheading of Saint John the Baptist” by Caravaggio, nine niche chapels (eight of them dedicated to the “langues” of the Order). Whatever you do, don’t just stand there looking at the ceiling; down at your feet is a glorious tapestry of inlaid marble honoring the Knights buried below; nearly four hundred Knights and Grandmasters were laid to rest here.

Onward and inland, away from the crowds, to one of Three Villages (Balzon, Attard, and Lija) …

3. The Parish Church of the Transfiguration of Jesus (Lija)

The parish of Lija was born in 1594, and the present church, commonly known at Our Savior’s Church, was completed a hundred years later. Its exterior, like many in Malta, is handsome without being showy. Inside, the red pillared walls flanking the altar are striking. The titular painting, “The Transfiguration of Jesus,” is by Mattia Preti, renowned Italian painter and Knight of the Order of St. John. The church stands at the end of a two-minute walk on Transfiguration Avenue from Naxxar Street. At a roundabout halfway along, you’ll meet the lovely Belvedere Tower (affectionately known as the “Wedding Cake”).

As an honorary Lijan (I lived there for three years in the 1970s), I’d be remiss if I didn’t sing the town’s praises. The Maltese love their festas. Every year, villages celebrate their patron saints on the appropriate feast days, with over-the-top decorations, masses, processions, parades, brass bands, and fireworks. Ask any local about his festa and he’ll assure you it has Malta’s finest fireworks. If he’s a Lijan, he’s right. Get there by August 6 (Feast Day of the Transfiguration of Our Savior) to see for yourself; there’s still time.

4. Basilica of the National Shrine of the Blessed Virgin of Ta’ Pinu  (Gharb, Gozo)

Go west to Cirkewwa and hop a ferry to Gozo, the smaller of the two main Maltese islands, where the pace slows down. In the capital, Victoria/Rabat, a magnificent view awaits atop the walled fortress known as the Citadel. From its heights you can see a rural landscape dotted with villages and churches.

Perhaps the most impressive of these is the beautiful Marian shrine of Ta’ Pinu, a 10-minute drive to the northwest. It stands alone in the countryside, bell tower to one side like a watchtower; there’s a castle air about it. It’s a very popular place for a wedding, and Malta’s a very small world, so you might just happen upon a Cinderella and her Prince. These things happen in Malta, more often than anywhere else I’ve been.

Earliest records for a chapel here date to 1534. In a sorry state by 1575, it survived demolition orders, legend says, when a workman took an ax to the structure and broke his arm, seen as as a divine order to cease and desist. It became Ta’ Pinu (“of Peter”) in the early 1600s when Pinu Gauci funded its first restoration and commissioned the titular painting, the “Virgin of the Assumption”;  the old chapel and painting remain intact behind the basilica’s altar.

In 1883, two locals heard the Virgin’s voice coming from the painting: she asked Kharmni Grima to pray three Hail Marys for the three days she lay in the tomb before her Assumption; she asked Francesco Portelli to encourage devotion to the hidden wound of her son, caused by the weight of the cross. Grima’s farmhouse is open to the public, and there’s a Way of the Cross running up Ghammar Hill opposite the shrine.

Miracles kept coming, pilgrims flocked in increasing numbers, and the shrine was enlarged to accommodate them. It was designated a basilica in 1932. Pope John Paul II visited in 1990 and placed five golden stars on the titular painting. In 2010, it was brought to Malta, where Pope Benedict XVI presented the Virgin with a Golden Rose, after which she traveled back to Gozo like everyone else, on one of the three ferries that regularly make the 4-mile crossing.

In 2017, freestanding mosaic walls were added on either side of Ta’ Pinu’s plaza, depicting the Mysteries of the Rosary and scenes of Gozo. The walls curve inward toward you like open arms of welcome, and hug you farewell when you leave. Ta’ Pinu is a unique delight.

Now back to Mgarr, sail back to the main island. Check the name of your ferry; you may have found yourself on the “Ta Pinu.” From Cirkewwa, head southeast 9 kilometers to our last stop.

5. The Sanctuary of Our Lady of Mellieha (Mellieha)

You’re on a hilltop overlooking Mellieha Bay. On a clear day you can see Comino and Gozo, too. I highly recommend you take a guided tour (Joseph gets five stars) and plenty of time to wander alone, too. I felt this church to be whispering things, it was small but special in some big way, like no church I’d ever been in. I had questions: Why is the altar at an angle? Why do lions flank its steps? Why do they look Asian? Why are bishops packed like sardines in a fresco on the vaulted ceiling over it? What happened to the bottom half of the Mary icon? Whose bones are those behind the glass in that side niche? What are those men doing to Mary and Baby Jesus with those sharp tools? Where is that in the Bible?

This is a place to be savored fresh, so I’ll share only a tiny fraction of what I learned. The bishops are believed to have consecrated the building in the 5th century. The questionable men? Suffice it to learn a centuries-long Maltese phrase you’d be wise not to speak publicly on multiculturally friendly Malta in the 21st century: “Ħaqq għat-Torok!” Damn the Turks.

It’s hard to leave. There’s a wall covered with intimate and compelling votive offerings: tokens of gratitude to Our Lady of Mellieha for prayers answered, both written and in the form of representative objects—everything from tiny baby clothes to a motorcycle helmet. There’s another wall covered with votive paintings depicting miraculous rescues at sea—storms, sea monsters, near-drownings, always Our Lady and Baby Jesus floating on a cloud watching over.

Don’t leave before you’ve crossed the street and gone down the steps to the subterranean crypt, “Our Lady of the Grotto.” It’s small, dark, and refreshingly cool. The Times of Malta tells its interesting story.

When you leave Malta, you’ll have done something remarkable, whatever the specifics of your stay. You’ll have gone where archaeologists never dared dream they’d find things so old (don’t wake the Sleeping Lady), where St. Paul ran aground and changed everything, where the sights and stories and people will, I hope, leave you the feeling that Faith, Hope and Charity are not just three airplanes, but also what Malta is made of, which explains how after centuries of captivity to hostile invaders, they welcomed you with open arms. God Bless Malta.