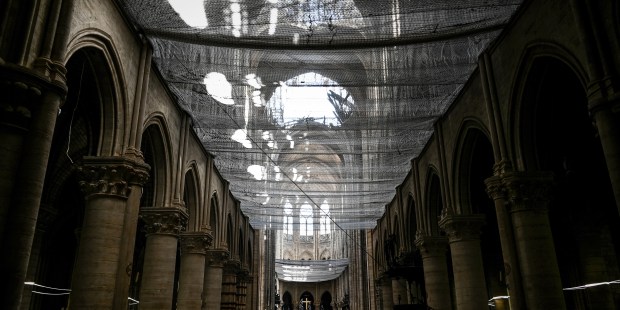 Vaults could collapse in wake of firefighters’ drenching in April and 100-plus-degree temps in July.

Parisian firefighters saved the Cathedral of Notre Dame from collapse, but the millions of gallons of water they had to use to extinguish the April 15 fire, combined with the heat wave Paris is now suffering, may be an even greater threat to the eight-century-old building.

The chief architect of Notre Dame, Philippe Villeneueve, said Wednesday that he fears the cathedral’s vaults may give way under current conditions.

“What I fear is that the joints or the masonry, as they dry, lose their coherence, their cohesion and their structural qualities and that all of sudden, the vault gives way,” Villeneueve told Reuters July 24. “As I speak here, the vaults could very well collapse, because since April 15, we haven’t been able to access the vaults, neither from above nor from underneath.”

Villeneueve said he is “very worried” about the heat wave because, “as you know, the Cathedral suffered from the fire, the beams coming down, but also the shock from the water from the firefighters. The masonry is saturated with water.”

The April fire began in the cathedral’s “attic,” a structure of beams hewn from local trees 850 years ago and holding up the church’s main roof. That ancient wood was totally destroyed, and the cathedral’s iconic spire came crashing down, puncturing a hole in the interior vault. But most of the vault held up, and much of the artwork inside, including the rose windows, were spared the ravages of the fire.

Villeneuve said that unlike the bell towers and other parts of the cathedral, experts had still not been able to access the ceiling from above or below, Reuters said. The wire service noted that workmen have erected a giant white tarpaulin over the gutted roof, stabilized the cathedral’s pinnacles and placed dozens of sensors to detect any movement.