This is a movement that could change the world.

Nestled in the quiet, forested hills of New Hyde Park, New York, lies a place secluded from the world. It’s a place that was founded as an experiment. An experiment in what a world would look like if love and fraternity replaced fear and division.

It all began 75 years ago as bombs pounded the European countryside and men were cut down by machine gun fire during the throes of World War II. A young elementary school teacher named Chiara Lubich was profoundly moved by the inhumanity and divisions of the war that raged around her. She was haunted by the Gospel message “May they all be one” [John 17:21] with this living hell as a backdrop. Peoples united in war for a flag, a piece of earth, or an ideal … divided they fell.

While in prayer she was compelled by the ideal of unity, that all could be one, if only each person could turn to the other with eyes of love and acceptance rather than hate and resentment. The solution was simply to love; love the person in front of you and to inspire others to do the same.

Chiara was joined by a number of friends all inspired by this simple yet powerful idea. And over the next few years as the last shots were fired and the war came to its death, a world hungering for hope and healing quickly embraced the message. It spread throughout Italy, and then other parts of Europe and throughout the world. 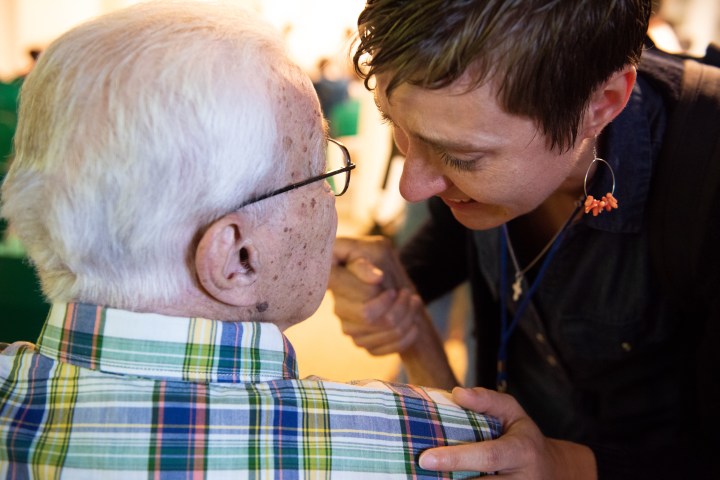 And with this, the Focolare Movement was born. Focolare, meaning “hearth” or “family fireside” in Italian, represents the love and unity of a family. While Focolare is deeply rooted in the Catholic faith, the movement itself transcends religious affiliation to include all creeds and cultures. It’s simply about creating unity by loving the other without regard for one’s beliefs and without condition.

The art of loving

“To love in the way Jesus taught us we have to love everyone, without excluding anyone or discriminating in any way. We have to take the initiative, being the first to go out to others and love them as we love ourselves. We can refuse our love to no one, not even to our enemies.”

From the beginning, Lubich had the idea of creating “cities” dedicated to the practice of living out this ideal, and the concept of “Mariapolis” or “City of Mary” came into being. The only law in the city would be to “Love one another.”

And tucked away in New Hyde Park is just such a place. An 80-acre community with over a dozen homes, recreation centers, and a Chapel, it is open to anyone wishing to come and spend some time to learn and live out the ideals of unity and love.

To spend time at Mariapolis is to encounter a glimpse of what Heaven might be like. It’s a place where those gathered think of the other first, making the needs of each person the greatest priority. And to participate in this leads to feelings of great peace and freedom, as one can easily imagine God intended for us to live like this from the beginning.

But the power of the movement travels far beyond these cities, and the members of Focolare (including those who do not live in a Mariapolis) bring this ideal to their homes, communities, and workplaces, each becoming a messenger of unity to those they encounter.

What started as one woman’s cooperation with a singular grace has spread to over 182 countries, with more than 32 “Cities of Mary” around the globe and millions of members, all committed to bringing unity through love and fraternity.

In a world on the verge of destroying itself through its divisions, Focolare is a growing wave of hope that can unite even those on the most divergent of paths. It brings a wind of change that blows through the dark alleys of the cities, the rolling hills of the countrysides, and over the desert plains that can build bridges between cultures and peoples. Its language is that of love, the kind that changes hearts that hate, to hearts that heal. And if the world were to embrace this incredible gift, it would be the movement that could change the world.