A Crystal Cathedral that can withstand a magnitude-8 earthquake

The fifth launch of a cathedral in the United States since 2008, the former home of televangelist Robert Schuller was rechristened as "Christ Cathedral" July 17 of 2019

The noted Crystal Cathedral, long the home of televangelist Robert Schuller, was rechristened as “Christ Cathedral” July 17 of 2019, when it became the seat of the Diocese of Orange, California. According to Rocco Palmo of the Whispers in the Loggia blog, it was the fifth launch of a cathedral in the United States since 2008.

Unlike other dioceses, such as the Diocese of Raleigh, the Diocese of Orange did not have to start totally from scratch. But it did have significant work to do to transform the Crystal Cathedral into a Catholic house of worship. The diocese produced a

video
to explain some of that $77 million transformation.

The cathedral’s new name was designated by Bishop Emeritus Tod D. Brown. In retrospect, that might have turned out to be the easiest part. Converting a Protestant megachurch into a Roman Catholic cathedral was far more involved.

It included adding a tabernacle, where the consecrated Hosts that Catholics believe are the Body of Christ are reserved. In Christ Cathedral’s case, the tabernacle was placed in a special part of the cathedral known as a Blessed Sacrament Chapel, where the faithful can go and pray in silence.

The altar where the bread and wine are consecrated should normally have relics embedded into them, reminiscent of the practice of the early Christians, celebrating Mass above the bones of the martyrs in the catacombs. In Orange, the relics reflect the ethnic diversity of the diocese’s current population. The cathedral’s first relic is from Andrew Dung-Lac, a Vietnamese priest beheaded in 1839. As his last official act before retiring, Hanoi’s Cardinal Nguyen Van Nhon bequeathed the relic to his sister diocese, the Diocese of Orange.

Read more:
“Let us build a church so big they think we’re crazy”

A baldachin hovers 30 feet above the altar, drawing attention to it and holding a 1,000-pound steel crucifix with a wooden corpus that resembles ivory. The cross is encrusted with jewels.

The 78,000-square-foot church is more than 400 feet long and 100 feet tall and seats 2,100 people.It has a facade made of some 11,000 panes of glass. Workers installed 11,000 sail-shaped steel powder-coated plastic-and-fabric “quatrefoil” window shades both to regulate the natural and artificial light and to help with the acoustics.

The quatrefoils cost $6 million and are designed to deflect UV rays and heat and reduce outside light, which is deemed a distraction from the altar. Each quatrefoil is composed of four triangles, permanently situated at varying angles. The triangular pieces hover over each pane and open from zero degrees to 45 degrees to minimize heat and glare.

Bishop Kevin W. Vann went to Verona, Italy, to choose the Carrara marble that would be fashioned into an altar, ambo, cathedra and baptismal font.

Read more:
4 Churches in the most unusual places

The Hazel Wright organ, with more than 17,000 pipes, is the fifth largest in the world. Affectionately known as “Hazel,” it was dismantled and shipped to the Fratelli Ruffatti workshops in Padua, Italy, in 2014 for restoration. It was shipped back to California in 2016 where it was temporarily stored in an Irvine warehouse before being reinstalled in Christ Cathedral. Part of the organ’s renovation includes restoring the connection between the Arvella Schuller Carillon outside the cathedral and the organ console so the 52-bell carillon can again be played from the console as well as from the carillon keyboard in the Crean tower.

The cathedral is designed to withstand a magnitude-8 earthquake.

Schuller and his wife, Arvella, founded the Garden Grove Community Church in 1955. An affiliate of the Reformed Church in America, the church first held services in space rented from the Orange Drive-In Theatre. The faithful listened in their cars. According to the Los Angeles Times, it was the same year Ray Kroc launched his first McDonald’s restaurant and Disneyland opened its doors, just a few miles from where Crystal Cathedral would eventually be built.

Completed in 1980, the original reflective glass building of the Crystal Cathedral was designed to incorporate Schuller’s request that it be open to the “sky and the surrounding world,” as well as conducive to television filming.

“Schuller retired in 2006, and his ministry, like many things near and far from God, ended in all of the usual ways,” the LA Times said. “There was the overly aggressive expansion, the aging congregation, a botched line of succession and all of the money owed to creditors. Crystal Cathedral Ministries filed for bankruptcy in 2010. After Schuller’s ministry went bankrupt, the Diocese of Orange purchased the Crystal Cathedral complex, which also includes structures designed by Richard Neutra and Richard Meier, for $57.5 million in 2011.”

Schuller died in 2015 at age 88. Orange County meanwhile had undergone a transformation, with large immigrant populations from heavily Catholic countries. “That same demographic shift has helped fuel the growth of the diocese,” which was established in 1976, said the Times. “The Diocese of Orange is now home to 1.3 million Catholics, making it the 10th largest in the country.”

At a recent gala evening for donors, Fr. Al Baca, director of the diocese’s Office for Evangelization and Faith Formation, recalled a conversation he’d had in the ’90s with Schuller.

“One day, while I walked him out as he was leaving an event at Holy Family Cathedral, he told me, ‘You know, I can foresee my cathedral becoming a Catholic cathedral someday,'” Fr. Baca told the Orange County Catholic, the diocesan newspaper.

Read more:
A virtual tour of the Cathedral of Santiago de Compostela that is really worth it

At a Mass on the eve of the dedication Mass, Orange Auxiliary Bishop Timothy E. Freyer spoke in a homily of Schuller’s commitment to building a “place for Christ forever.” Bishop Freyer said Schuller had urged the bankruptcy judge to allow the Diocese of Orange, which was not the highest bidder, to acquire the property.

The Hour of Power television show had 2.2 million views in 156 countries at its peak in the 1970s. While Schuller’s sermons had a worldwide television audience, Christ Cathedral will have a global outreach, in a sense, offering Mass on Sundays in English, Spanish, Vietnamese and Mandarin. A reported 11,000 Catholics attend Mass there each weekend.

As Bishop Vann told Crux’s Christopher White, “I would hope that when people see that steeple they will think, ‘God is here!’ and he’s drawing us toward himself and one another through the ministry and presence of Christ Cathedral, and the presence of God is growing.”

Make sure to visit the slideshow below for a virtual tour of Orange County’s Christ Cathedral. 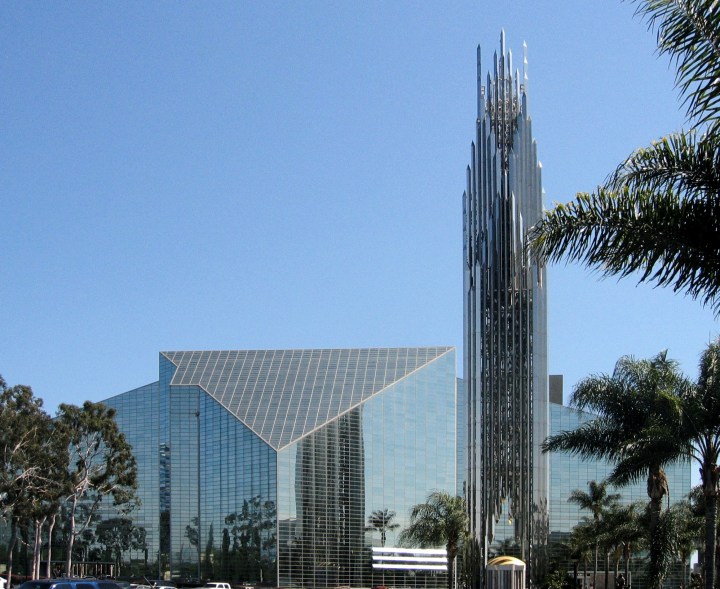