In Sri Lanka and the Philippines, a church and a cathedral re-open after deadly terror strikes 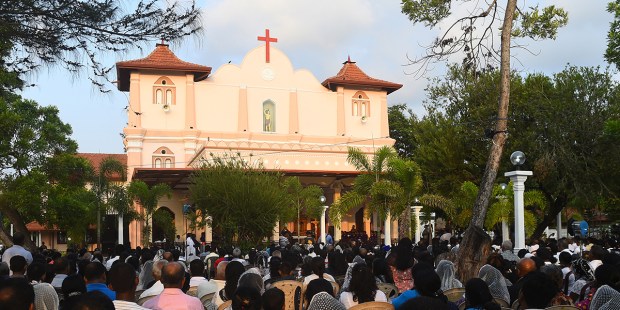 With the front pews reserved for survivors of the attack, more than 1,000 people attended the Mass held July 21 under tight security.

Three months after a suicide bomber killed almost 100 worshipers at St. Sebastian’s Church in Negombo, Sri Lanka, Cardinal Malcom Ranjith of Colombo presided at the first Mass at the church since the Easter Sunday bomb attack on April 21, 2019.

With the front pews reserved for survivors of the attack, more than 1,000 people attended the Mass held July 21 under tight security.

In front of the church, in a glass encasement, now stands a statue of Christ still splattered with the blood of worshipers who died in the church on Easter Sunday.

In his homily, Cardinal Ranjith repeated his charge that various government agencies and officials had failed to prevent the terror strikes, which altogether killed more than 250 at three churches—including St. Antony’s Shrine in Colombo—and three luxury hotels.

As he has done numerous times since the bombing, the cardinal called on Christians not to retaliate against the country’s Muslims. The perpetrators of the attacks, he stressed, were caught up in an international terrorist conspiracy.

Meanwhile, in Jolo, the Philippines, Archbishop Gabrielle Caccia, papal nuncio to the Philippines, on July 16 presided over the re-dedication of Our Lady of Mount Carmel Cathedral, six months after two improvised explosive devices killed 21 worshipers and injured almost 100 others.

One of the bombs was detonated inside the cathedral during Mass January 27; the other device exploded outside the building. Since 2000, the cathedral and its vicinity had been targeted by bomb attacks nine times.

Archbishop Caccia, at the conclusion of the re-dedication Mass assured survivors of the blasts and those who lost loved ones in the attack that ‘”they are not forgotten or neglected.”

He added: This is not only manifested with financial assistance, but through the solidarity of prayer all over the world.”

Jolo is the capital of Susu Province, which is largely Muslim. The local Church has been strongly committed to fostering Muslim-Christian dialogue as a bulwark against radicalism.

The perpetrators of the bombing are suspected to be associated with Islamist terror group Abu Sayyaf, which occupied the center of Marawi City in the Mindanao region for five months in 2017.

Directly under the Holy Father, Aid to the Church in Need supports the faithful wherever they are persecuted, oppressed or in pastoral need.  ACN is a Catholic charity — helping to bring Christ to the world through prayer, information and action. To donate or help ACN, visit churchinneed.org.