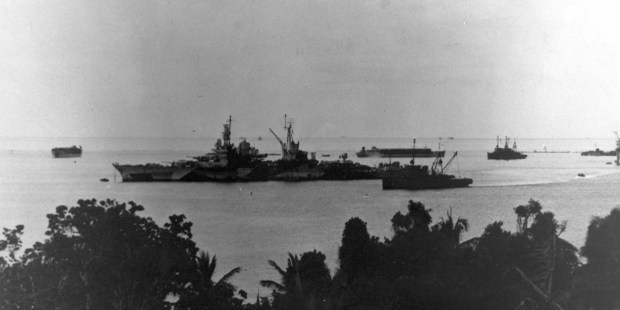 A Connecticut priest who died during WWII while praying for his shipmates might be receiving military honors.

Fr. Thomas Michael Conway, a Catholic priest from Waterbury, Connecticut, died ministering to sailors after the USS Indianapolis was torpedoed in 1945. He is thought to be the last American chaplain killed in World War II.

The “Indy,” as it was known, was struck by two Japanese submarine torpedoes, days after delivering critical parts for the first atomic bomb to the United States air base at Tinian Island. Hundreds of crewmen went down with the ship, a Portland-class heavy cruiser, while almost 1,000 others floated in shark-infested waters for days. Many died from shark attacks. Others suffered the effects of the hot sun, cold nights, overexposure to salt water and lack of drinking water.

Conway swam among them, saying prayers and comforting frightened, sometimes delirious sailors, encouraging them not to give up.

The sinking was not known for days due to a serious Navy oversight. When a routine patrol flight finally spotted survivors in the water, a rescue mission was dispatched. “Sixty-seven men came out of the water because of [Fr. Conway’s] efforts,” said Bob Dorr, secretary of the Waterbury Veterans Memorial Committee.

But for Conway himself, it was too late. He died on Aug. 2, after three days in the water.

The Waterbury Veterans Memorial Committee about five years ago petitioned the Navy for Conway to be honored with the Navy Cross. But a Navy rule requires those nominating sailors for awards to be of higher rank than the nominee at the time of the heroic act. None of the survivors of the Indianapolis still living at that time fit that requirement, according to the Waterbury Republican-American.

Dorr is not giving up.

“The actual letter of denial said, ‘Nothing in this denial precludes you from making another application,’” Dorr told the newspaper. “We are in the process of doing that right now.”

He said his committee is resubmitting the application, along with the endorsements of Waterbury Mayor Neil M. O’Leary and Dr. Kristaps Keggi, a prominent, Middlebury, Connecticut-based orthopedic surgeon who has high-ranking acquaintances in Washington.

“The story of Fr. Conway’s heroism and bravery had gone unnoticed, and Dr. Keggi and I both believe it’s time to right a wrong,” Dorr told the Republican-American. “He deserves recognition by the Navy.”