Do Anglicans pray the Rosary? 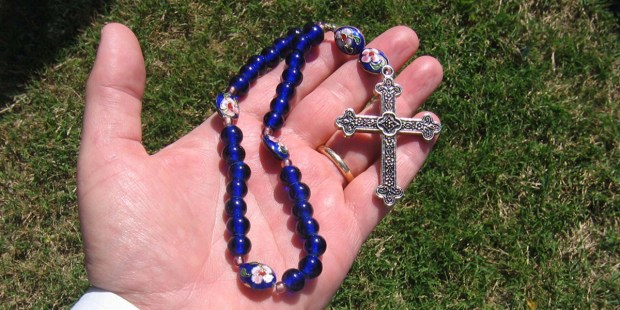 The Rosary is receiving a revival among many Protestant Christians, including many Anglicans.

The Rosary is a well-known prayer among Roman Catholics that incorporates a physical string of beads and various scriptural prayers, such as the Our Father and Hail Mary. While the Rosary has often been criticized by Protestant Christians, many of those same Christians are now turning to the ancient devotion.

According to the Anglican Pastor, the Rosary used by many Anglicans can take two different forms. The first is the traditional Rosary as prayed by Roman Catholics, using the same prayers and beads.

The King of Peace Episcopal Church explains a little history behind this modern invention.

Anglican Prayer Beads are a relatively new form of prayer, blending the Orthodox Jesus Prayer Rope and the Roman Catholic Rosary. The thirty-three bead design was created by the Rev. Lynn Bauman in the mid-1980s, through the prayerful exploration and discovery of a contemplative prayer group.

The use of the rosary or prayer beads helps to bring us into contemplative of meditative prayer—really thinking about and being mindful of praying, of being in the presence of God—by use of mind, body, and spirit. The touching of the fingers on each successive bead is an aid in keeping our mind from wandering, and the rhythm of the prayers leads us more readily into stillness.

Anglicans, Episcopalians and many Lutherans may use various types of prayer beads as an aid to prayer, but do not necessarily ask the intercession of the Blessed Virgin Mary. However, Anglicans are the most likely Protestant Christians to include the Virgin Mary in their prayers, asking her to intercede for them before God.

Anglicans who have entered into full communion with the Catholic Church similarly will use the Rosary as an aid in prayer and maintain it as part of their devotional life.

The Rosary is slowly becoming more acceptable by Protestant Christians as the myths behind the Rosary are demystified. It is no longer seen as an obstacle to a personal relationship with Jesus, but can be used to bring a person closer to God.

Read more:
Nervous or struggling? Pray a mystery of the Rosary