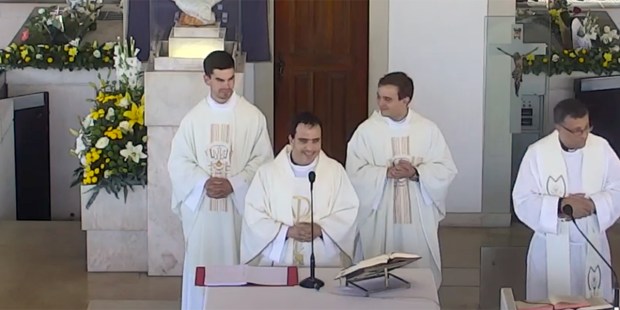 He wants to dedicate his priesthood to Mary to be more closely united to Jesus.

Fr. Tiago Varanda, who has been blind since the age of 16 due to congenital glaucoma, was ordained to the priesthood at the Marian shrine of Our Lady of Sameiro in Braga, Portugal, on July 15, 2019. The 35-year-old is reportedly the first blind man on the record to be ordained to the priesthood in Portugal, although there are other blind priests in that country who lost their sight after ordination.

The day after his priestly consecration, Fr. Tiago went to Cova da Iria to celebrate Mass at the Chapel of the Apparitions of Our Lady of Fatima and to dedicate his priesthood to her. In declarations to the Press Office of the shrine (published on the shrine’s website), he said:

“Fatima has always been a special place for me, since I was a child, and at this important moment in my life, I wanted to come to consecrate also my priestly ministry in Mary’s hands, because I know that, with her, I can be united to Jesus more easily.”

The unique experience of a blind priest

The newly ordained priest had already visited the shrine while he could still see. Naturally, the way he experiences it now is different.

“The sounds of the people, of the bell, and the occasional bird, transport me to this peaceful place, and the characteristic scent of the candles [carries me] to devotion and reflection … Everything [moves] very slowly and serenely, which helps me a lot to stop and concentrate on God,” he said.

In his words published by the shrine of Fatima, Fr. Tiago talks about the limitations he experiences because of his disability, and about how the loss of his sight may give him a unique experience in exercising his priestly ministry.

“Not being able to see allows me not to get so distracted by external things, although, internally, I have to make the same effort, so often difficult, to achieve concentration and interior silence. Also, I feel like my other senses are becoming more acute, especially hearing, which is the ability to listen, which can be a gift so I can be a priest who listens better to people in their dramatic situations, in their joys, and in their faith.”

Inheriting a legacy of service

The Eucharistic celebration in Fatima was concelebrated by Fr. Tiago and two other newly ordained priests, Fr. Jorge Gonçalves and Fr. Pedro Oliveira, as well as “veteran” priest Monsignor Joaquim Fernandes, who is 103 years old and was celebrating his 74th anniversary of priestly ordination that day.

The presence of old and new generations of priests at the altar highlighted the continuity of the gift of the priesthood, passed on since Christ first instituted the sacrament. When Mass ended, the members of the congregation greeted the celebrants with hearty applause.

Let us pray that these young priests may serve the Church faithfully and joyfully for many years, following in the footsteps of priests like Mons. Fernandes!