Bernal's father worked as a security guard at the Catholic church built under a salt mine.

Egan Bernal made history on Sunday as he became the first Colombian to win the Tour de France, the world’s premier bicycle race. Hailing from one of the most Catholic countries in the world, Bernal also comes from one of the world’s most visited Catholic pilgrimage destinations.

The 22-year-old Egan, was born in Zipaquirá, a small town in central Colombia most famous — until now, that is — for the Salt Cathedral, an underground Catholic Church carved entirely out of salt rock. According to news reports, Egan was inspired to take up cycling by his father, who worked as a security guard at the Salt Cathedral, and cycled in his spare time.

Local media have called Bernal the “king of the escarabajos” or beetles, the name applied to the Colombian cyclists known for their ability to ascend the steep hills that would prepare him to emerge victorious in the Tour de France, a grueling 3,409 km, three-week race traversing the French Alps.

This year’s race was the highest in Tour de France history, with five summit finishes, providing Bernal an opportunity to capitalize on the climbing ability for which all of the world-class cyclists from Colombia have been known.

What do we know about the Salt Cathedral of Bernal’s birthplace?

Aleteia’s Vicente Silva Vargas last year wrote that the Salt Cathedral of Zipaquira “gives the visitor — Christian, atheist, or agnostic — a variety of sensations, from recollection, admiration, and mysticism to reverence, inner peace, and gratitude.” 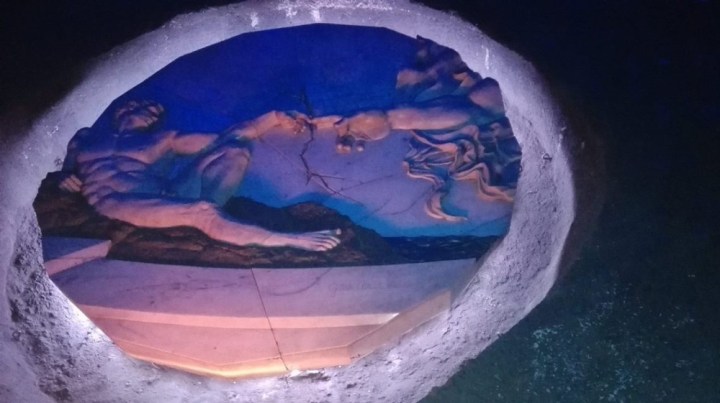 The cathedral got its start in 1932 when a chapel was built inside the salt mines dug by the Musiscas or Chibchas, an indigenous people who used the salt to trade for food and goods, long before the arrival of the Spanish.

Because of the Christian devotion of the miners, plans were made to build a cathedral within the underground mines, which was inaugurated on August 15, 1954.

From the day of its inauguration on August 15, 1954, the first church was described as a “monumental and indescribable work that could only have been inspired by the power of God.” The data show it: the excavation was 80 meters deep, under a mountain of 400,000 square meters. It had six support columns of 80 square meters each; four naves that were 120 meters long, 13 meters wide, and 22 meters high; and a total area of 5,500 square meters with capacity for 8,000 people. Its most visited shrines featured images such as Our Lady of the Rosary of Guasá, patron saint of the place, better known as the Virgen Morenita, or the Dark-Skinned Virgin.

A second cathedral was built in 1995, after structural problems forced the closure of the first cathedral in 1992. According to Vargas:

This second cathedral, carved 180 meters underground and inaugurated in 1995, has 8,550 square meters of space. One of its most breathtaking places is the Viacrucis, a journey of 386 meters during which you can pray, remembering 14 moments from the Passion and death of Jesus. The cathedral’s three fascinating naves, each 80 meters long, evoke the birth, life, death, and resurrection of Christ. In the central part is the largest stone-carved cross in the world, a sculpture measuring 16 by 8 meters that can be admired from different angles. Four columns were erected there, representing the evangelists Luke, John, Mark, and Matthew. An artist also carved The Creation, a sculpture that recalls Michelangelo and the Sistine Chapel. Other admirable monuments carved by Colombians are La Piedad (the Virgin Mary holding Christ’s dead body), the Holy Family, an interior dome that rises towards the sky, the archangel, the chapel of the Blessed Sacrament, the narthex, and some labyrinths that represent the penances of the unbaptized.

Over 600,000 people from 145 countries visited the Cathedral in 2017, making it one of the most important Catholic churches in the world — a testament of the faith of its visitors and of the remarkable and unique architectural achievement it represents.

As the world now turns its gaze on Zipaquirá, Colombia, the birthplace of the reigning champion of the Tour de France, we are reminded that for every climb there is a beginning. And in the words of people of Zipaquirá, that beginning can be best summed up in the words they use to describe their Salt Cathedral, “An encounter with God under the earth!”