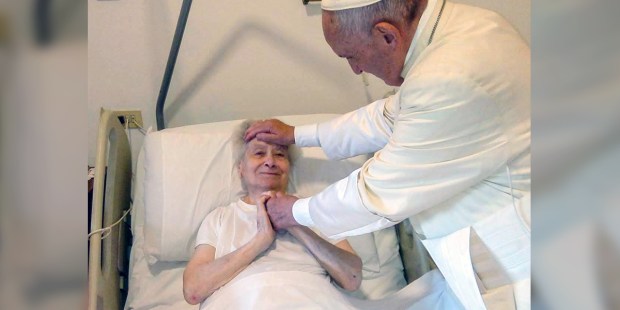 The Daughter of Charity has served for many years in the Domus Sanctae Marthae, attending not only the Holy Father but other Vatican guests

A nun who spent many years working at the Domus Sanctae Marthae, the Vatican residence where the pope has his apartment, fell ill. So on Sunday evening, Pope Francis popped in to visit her.

Sister Maria Mucci of the Daughters of Charity was taken to the infirmary at her congregation’s house in Rome, the Regina Mundi House, when she got sick. It was there that the Holy Father went to visit her.

In addition to Sister Maria, the pope stopped to see another special aspect of Regina Mundi: a relic of St. John Paul II.

The relic is the bloodstained shirt the Polish Pope was wearing when he was shot in St. Peter’s Square on May 13, 1981. The bullet hole is still visible on the shirt, as well as the cuts made to remove it in the emergency room.

Gemelli Hospital, where John Paul II received treatment after the assassination attempt, gifted the shirt to the Regina Mundi House for the Jubilee Year of 2000.

The Daughters of Charity keep St. John Paul II’s relic in their chapel where visitors are welcome to venerate it.

In addition to his Sunday evening visit with Sister Maria, Pope Francis also paused for a picture with members of the Daughters of Charity community who staff the residence, along with employees and guests.

At the end of his visit, the Holy Father gave them all his blessing.