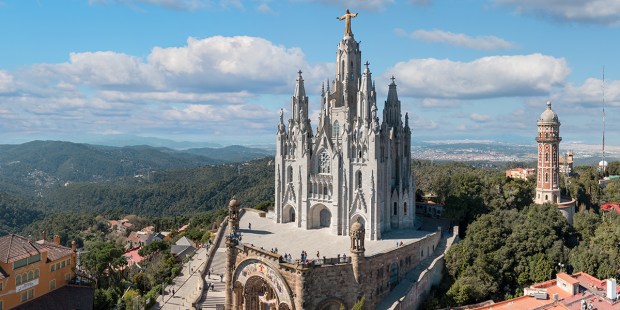 Complete with an amusement park, Sagrat Cor is an excellent place for a stop on a family vacation.

At the top of the tallest mountain in Barcelona, Spain, overlooking the sprawling Catalonian landscape, rests the Expiatory Church of the Sacred Heart of Jesus (Temple Expiatori del Sagrat Cor). A masterpiece of Spanish architecture, the church looks like a fairy tale castle towering over the Barcelona skyline.

According to Wikipedia, the plans for the mountain top church began in the 19th century, after rumors floated that the site could be turned into a Protestant church, or even a hotel/casino. In 1866, Barcelona’s “Board of Catholic Knights” acquired the land and gifted it to St. John Bosco, who decided that the church to be erected on the site should be dedicated to the Sacred Heart.

Construction on the crypt lasted from 1903 to 1911, and in 1915 work on the main building began. Although the building was consecrated by Bishop Gregorio Modrego Casaus, in 1952, the sky-reaching spires would not be complete until 1961, when construction was formally concluded.

Sagrat Cor is broken into two levels. The first is the crypt church: a Romanesque building which looks almost like a fortress; the second is a neo-Gothic style church complete with rising spires and flying buttresses. The facade is decorated with high-quality statues featuring the apostles and several saints, and above the entrance to the crypt is a breathtaking mural of the Risen Christ.

Sagrat Cor stands on the highest peak of a mountain known as Tibidabo, which AtlasObscura notes is derived from the Latin Vulgate Bible verses, Matthew 4:9 and Luke 4:6. According to local lore, this Barcelona mountain was the site where the devil tempted Christ, during his 40-day fast prior to the beginning of his public ministry.

The phrase, tibi dabo, means I will give to you. It was supposedly said to Jesus by the devil as they looked down from a mountain on the kingdoms of the world.

Alongside the church at the top of Tibidabo is an amusement park, constructed in 1899. It is one of the oldest parks of its kind and still has some of its original attractions, including Museu d’Autòmates (Mechanical Museum). It is the perfect spot to bring your kids after a tour of the church.

Take a look at the video below for images of the church grounds and interior.