Sorry, the universe doesn’t love you. But God does! 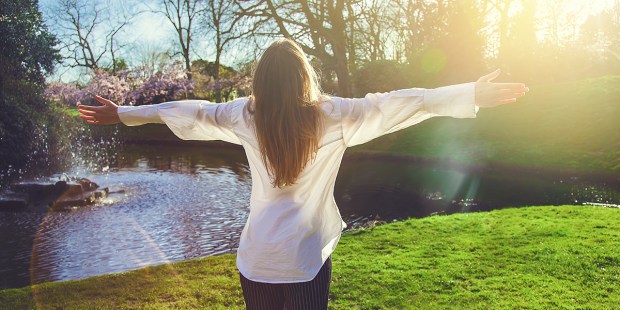 The rise of non-traditional presidential candidate Marianne Williamson has led to no small amount of social media sarcasm, one result of which has been the churning up of many of her old tweets. In 2013, she tweeted, “The universe literally loves you.” I have often heard friends and family refer to the universe in a similar way. They speak about the universe guiding them, directing good energy their way, and even caring for them. An abstract, anthropomorphized universe has replaced God in the lives of many people.

Our awe of the universe is understandable and it is not new. “The eternal silence of these infinite spaces terrifies me,” wrote Blaise Pascal back in the 17th century. Ever since man has been able to look up into the sky and marvel at the stars, he has experienced a kind of reverence for the natural world, a reverence that has only increased as we have come to see how small even the earth itself is when compared with the wide expanse of intergalactic space.

It is right and good that we should be humbled by the universe. Our worries and aspirations seem trivial when we realize how fragile, fleeting, and insignificant we are compared to, for instance, the distance that light traverses between the sun and our back porch. Yet, even though the universe is far greater than we are in many ways, we have advantages over the universe.

“If the universe were to crush him,” says Pascal, “man would still be more noble than that which killed him, because he knows that he dies and the advantage which the universe has over him; the universe knows nothing of this.”

Dietrich von Hildebrand wrote, “The person is open to all the great blessings of life: the moral values of other persons, the great beauty in nature and in art, the stirring metaphysical truths which form the background of our pilgrimage through time, the blissful experience of loving another and being loved in return.”

We all want to love and to be loved. It is through love that we come to know who we are and why we are here. Pope Benedict XVI, riffing on the work of the philosopher Josef Pieper, says that in loving we tell another person, “in more than words, ‘It is good that you exist.’”

in loving we tell another person, “in more than words, ‘It is good that you exist.’”

We need that acknowledgement from others to remind us of our goodness, but that is not enough to satisfy the longing of our hearts. Ultimately, we need to hear it from our Creator. “If ever man’s sense of being accepted and loved by God is lost,” says Benedict, “then there is no longer any answer to the question whether to be a human being is good at all. Where doubt over God becomes prevalent, then doubt over humanity follows inevitably. We see today how widely this doubt is spreading. We see it in the joylessness, in the inner sadness, that can be read on so many human faces today.”

We need to know, beyond the shadow of a doubt, that even if all else fails, even if we make horrible and irrevocable mistakes in our lives, even if every other human being on the planet turns a cold shoulder towards us, and indeed even if there were no one else here but us, that we would still be loved and therefore our lives would be worthwhile. This is a comfort that the universe, no matter how impressively vast, can never offer.

It is understandable, though, that the universe would be where so many people who cannot find their way to God would look for His graces. The universe may not be conscious or personal, but it contains within it the signature of the one who wrote it into existence.

When you look at a beautiful painting, you see something of the artist expressed therein. One of my favorite paintings is Portrait of a Young Woman, Drawing, now widely believed to be a self-portrait,  by the early 19th-century French painter Marie-Denise Villers. In its use of color and light, it reflects such a deep sense of the woman depicted that you feel like she is looking right at you. The painting communicates something of the reality of the artist, just as the universe communicates something of the reality of its maker. Yet the painting is not the artist. If I tried to speak with it, it would not speak back. If I attempted to embrace the painting, all I would be hugging would be oil and canvas.

The universe does not love you, but God does.

God is even more awe-inspiring in His breadth and depth than the far-reaching cosmos which He created. And that makes His love for you and for me truly breath-taking. He invented stars and planets and blackholes. He arranged all of the world’s beauty, from the complex symmetry of natural phenomena like the Grand Canyon or Mount Everest to the inherent elegance of mathematics itself. He has breathed into life billions upon billions of people, including every genious or saint or hero who has ever lived.

Yet He chooses to love you, specifically you, in your particularity, in your talents and your faults, counting every hair on your head, and loving you so much that in Christ He was willing to make Himself subject to the same limitations that you are, to experience the same humanity that you do, and ultimately to give His life for the sake of preserving yours.

It cannot love you, but that does not mean that you should not love it.”

He thinks you are far more precious than the universe, which is why He has given you the universe for safe-keeping, trusting you with its discovery and its care. It cannot love you, but that does not mean that you should not love it, for when we love the world around us, not as an idol but as a sign of something even greater, we draw ever closer to the One who loved all of this into being.