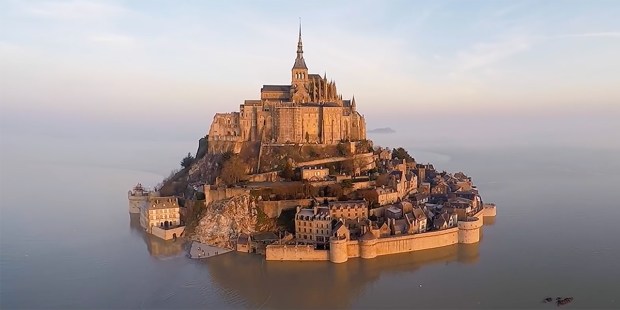 The ancient monastery built on an island has been inspiring pilgrims and monks since the 8th century.

Mont Saint-Michel, the medieval abbey built on an island off the shore of France’s northwestern coast, has served as a monastery since it was built in the 8th century.

Now, thanks to the wonders of drone technology, we are able to enjoy a bird’s eye view of the magnificent island in this short film, which received an award at the 2015 Drone Film festival in Cabourg, France.

In this film, we have a unique view of the abbey, situated as it is amidst the sea, and rising above the clouds. One thoughts cannot help but tend toward higher things as Bishop Robert Barron said of Mont St. Michel:

“I would challenge anyone to come here and walk the causeway leading up to the mount and not find himself beguiled into thinking of things higher and more eternal. The mountain itself, and then the architecture piled so exquisitely on top of it, draw the viewer’s eyes up and up, beyond this world.”