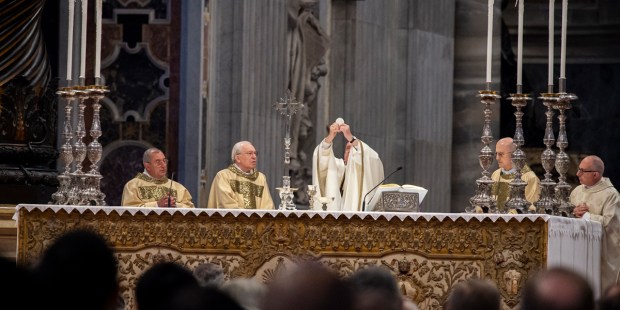 The Church is much more than Roman Catholic.

There’s more to Catholicism than meets the eye. What many people refer to as the “Roman Catholic Church” is only one of 24 Catholic Churches, for example. The others are Eastern Catholic Churches that have their own hierarchy and use various liturgical rites but which are in communion with the Pope.

1
Not just a religious service

The Mass, or Divine Liturgy, is not simply a religious service. The Catholic faith teaches that in each Mass, Christ’s Sacrifice on the Cross is made present. Kneeling (or standing, as Eastern Catholics do) during the consecration of the Eucharist, a Catholic is mystically in the presence of the Crucifixion on Calvary.

2
'One, holy, catholic, and apostolic'

An unbroken chain of succession characterizes the hierarchy of the Catholic Church. Christ commissioned the Twelve Apostles, and each one of them in turn commissioned bishops, who in turn ordained other bishops and priests. So every priest and bishop alive today, including the pope and the patriarchs of the Eastern Churches, has a lineage that traces directly back to the Apostles. It is why the Church is known as an “Apostolic Church.”

An image in a Yale University museum, taken from the excavation of Dura-Europa  in Syria, is thought to be the earliest surviving depiction of the Virgin Mary, dating from the 3rd century.

The Cathedral of Saint Domnius, the seat of the Archdiocese of Split-Makarska, Croatia, is regarded as the oldest Catholic cathedral in the world that remains in use in its original structure. The structure was built in 305.

Read more: Where are the oldest churches in Europe?

Read more:  Archaeologists find what may be the oldest depiction of the Virgin Mary

4
A Cloud of Witnesses

More than 10,000 persons in history have been declared to be a saint, that is, someone we know is in heaven. Many of them are martyrs, strictly speaking, those who have given their lives for the faith. But the 20th century had more martyrs than in the rest of the Church’s history.

5
Even Bigger Than Christmas

Christmas is not the most important feast on the Church calendar. Of course, it’s a joyful time, but were it not for the largely-commercial-driven “holiday spirit,” the feast of the Nativity of the Lord might not be noticed by most people in our society today. Far more important, according to Catholic theology, is the Feast of the Resurrection, commonly known as Easter. It has been called the “Feast of Feasts,” because Christ’s self-sacrifice on the Cross has won salvation for fallen man. It is the reason why we celebrate Christmas: Christ was born in order to suffer, die for our sins and rise from the dead.

Catholics fast during lent, in preparation for Easter. But some Catholics also observe other periods of fasting during the year, such as the weeks leading up to Christmas, known as Advent, or the two-week period approaching the August 15 feast of the Assumption of Mary. Eastern Catholics observe this period as the Dormition Fast.

In imitation of Christ’s compassion, Catholics have a long history in healthcare services. Today, in spite of recent economic challenges and legal restrictions, the Catholic Church in the United States is responsible for 660 hospitals, seeing an annual 5 million admissions.

The shortest reign of a pope was for Urban VII, who lived only 13 days after his election in 1590. The longest, aside from St. Peter, was Blessed Pius IX, who died in 1878, after serving for more than 31 years.

9
Celibacy is not for everyone

Married men can become priests. In Eastern Churches, the tradition of ordaining married men to the diaconate and priesthood (but not making them bishops) has continued from earliest times.

Anglicans and Orthodox consider themselves Catholic as well, because they profess the same Creed, which says, “I believe in one, holy, catholic and apostolic Church.” But divisions persist, based on certain theological questions and the issue of the jurisdiction of the pope. One of the most important movements in the Church, especially in recent times, is the search for Christian unity.