Choosing life: A portrait of strength, courage and hope 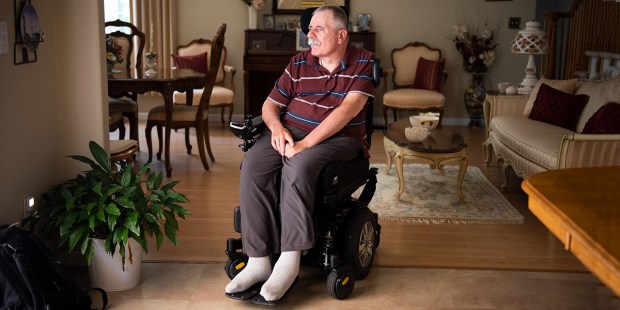 “You can tell your story and give someone else hope…”

“I put the barrel of the revolver to my head. As I placed my finger on the trigger, I’m looking at my daughter’s first grade photo through ‘my mind’s eye.’ I could see her looking at me and I thought, ‘If you pull the trigger, you’re not going to kill yourself, you’re going to kill that kid. Do you want to kill her?’ I put the gun down. At that moment I decided to embrace the fight to stay alive.”

In the early 1980s, Tony Lombardo was leading a “fairly regular” life. Married, a couple of kids, and enjoying the rhythm of life as most young fathers do. Nothing could have prepared him for what was about to become a slow, painful descent.

It began one morning with double vision. Over time, it slowly progressed into loss of motion in his left side. Over the next several long years, the loss of all fine motor skills progressed with the exception of his right hand. Tony was diagnosed with multiple sclerosis (MS). He had gone from a high school varsity cross-country athlete to a man confined to a motorized wheelchair without warning, and without the prospect of a cure.

“I hated God. I would look up to the sky and shout ‘WHY ARE YOU DOING THIS TO ME?? I’M A NICE GUY!! I DON’T BEAT MY WIFE AND KIDS!! YOU CAN’T BE A GOOD GOD!! WHAT’S WRONG WITH YOU?? I DON’T DESERVE THIS!!’ I had made one of the most difficult choices of my life the morning that I decided to end the struggle. I could no longer tolerate the limitations that my disorder had placed on me and upon my family. I was not willing to accept my new status … a life characterized by limitations. Such a life was not for me. I was an athlete. I was a runner. If I could not live the life I was accustomed to, then my life could not continue. I knew that I alone had the ability to end the ’emotional agony’ with one simple pull of the trigger, thus ending my plight. My perception was that I would be better off dead, and that everyone would be better off if I were dead.”

“I didn’t go through with it. In the next instant, I felt a new sense of emotion controlling my direction. I experienced an understanding that the battle may be uphill, but that I was up to meeting the challenge. The day before I had been lost in personal ruin, but now I suddenly felt a measure of hope. The words ‘fight the fight’ have echoed in my mind many times.

“On several occasions, in the bottomless pit of my emotional pain, I endured pain that had me cursing at the moon. I knew that I had to reach past my pain and find the ability to fight the fight. I watched my own Mother strive beyond herself to find that ‘special place’ where she fought breast cancer. I knew she would never allow herself to surrender to anything until she herself was ready to admit defeat. Mom never, ever admitted defeat.

“I learned this after meeting heroes who left parts of themselves on battlefields. I learned this as I became more and more aware of the importance of the work of policemen and firemen. In hospitals, I saw doctors and nurses willing to take the extra step to be honest and generous with their individual gifts. From each person, I learned a certain way to grasp the energy to ‘fight the fight.’”

“For a person to confess his or her weakness is one thing … but to outwardly display it is a change far deeper than anyone can imagine. In my case, denial of my illness created a demon that scared away those who wanted to help me the most. Truth be told, no one can help others until they accept their individual need for help. Sooner or later, we all learn that in life … sometimes we learn it the hard way. A rude awakening is forced upon us by sudden changes that we cannot control. You can’t run away from yourself.

“I feel as if I have survived the storm. However, with MS, there is no rebuilding of what once was. The memories are intact, but they are only thoughts associated with the past, I cannot return to the way things were. I needed a ‘rehab of the mind and soul.’ I needed to discover the ability to show love to anyone who was willing to help me. This was the first step in admitting that no one was to blame. This step, this first step, is a mind-altering experience. It is a revelation that enabled me to move toward the light in my head. Society cherishes the idea of the underdog climbing from the depths of despair to the heights of success. In movies, we embrace the concept of what the human spirit can achieve, or we witness the bravery of a hero to accept what the human condition can endure.”

“I do not know how to swim. When I was a kid, I was in the water at Coney Island in Brooklyn. I went in up to my neck. The tide took me out a few inches. I slipped and went under. I attempted to swim and yell for help, but to no avail. I fatigued. I went under for what seemed to be an eternity. I couldn’t breathe. I was drowning. My lungs were killing me. I was swallowing water. I came to the stark realization that I was going to die. At that point, I said good-bye to my mom, my dad and my brother. The very, very last thing I said was, ‘God, please let somebody grab me.’ No sooner did I finish saying the word ‘me,’ I felt a hand grab my wrist, and pulled me out. A man grabs me by the arms and started shaking me while shouting, ‘Are you OK kid? Are you OK?’ I was coughing up water. I thanked him a ‘million-bazillion’ times and walked back to the beach.

“I didn’t know it at the time, but God enabled that man to save me so that I may live and fulfill my ‘assigned station in life.’ Saving my life was HIS station in life. I firmly believe that my station is to live with MS and pay it forward.

“Years later, at the height of my anger with God, that incident came to mind and I went right back to that day. That was my defining moment … that’s why I’m here. This is where God wants me to be. The faith I found was not something I learned because of my situation. Rather, it was something hidden deep within myself that found a place to grow when most needed. … A seed was planted inside me as a young boy and I thank my parents for sharing their faith with me. I go to the Adoration Chapel as much as I can. I sit there and always say thank you … thank you for all You’ve done for me. Thank you for my wife, for my kids, my family and the people around me, and even for MS. I jokingly say to the Lord, ‘If this is where You want me, I hope I’m doing a pretty good job!'”

“My mission is to give people hope by teaching them how to face a physical challenge. This is done not only with the hope of overcoming any obstacle that life throws your way, but also with the understanding that you do not have to do it alone. You can become a part of something much larger than yourself. You can tell your story and give someone else the same hope which will enable them to conquer their struggles and tell their stories.”

Tony went from the depths of despair to build a life, raise a family, and become an inspiration to countless others in spite of the limitations that he once thought would be insurmountable. His witness shows that all life, regardless of challenge, is powerful, sacred and beautiful.

He lives near the Jersey Shore. He also writes a column entitled Let’s Hear Your Story (LHYS) for TAPinto.net. He collects stories that highlight people who have endured and survived incredible challenges.