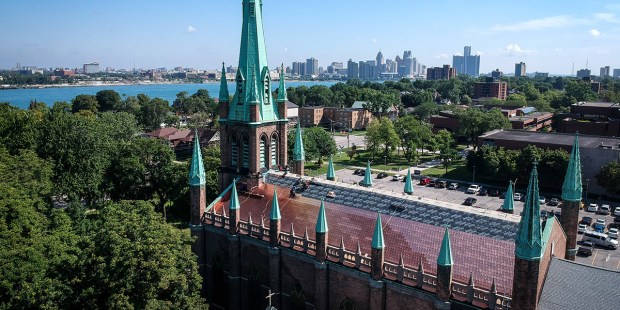 Our Lady of the Assumption began as a mission to the Hurons.

The auto industry in Detroit has been through some rough times, after decades of dominating the American economy.

The area’s churches have also seen their ups and downs.

Now, a historic church in Canada, directly across the international border from Detroit, promises to make a comeback to its former glory.

Our Lady of the Assumption in Windsor, Ontario, is the sister parish of Ste. Anne de Detroit in southwest Detroit. Both churches, a mile apart, were established by French missionaries. Assumption was founded as a mission of St. Anne’s in 1767.

According to the Detroit Catholic, Assumption has been the cultural home of Catholicism in Windsor and western Ontario for centuries. Almost every parish west of Montreal can trace its history to the church.

But the church has been closed since November 2014. Damage to the roof and interior plaster forced the parish to stop holding Mass in the church, and Assumption merged with nearby historic Holy Name of Mary.

Windsor lawyer and Assumption parishioner Paul Mullins, who is leading the fundraising campaign, said shifting demographics have seen the parish become a home for students from St. Clair College and immigrants from India who have carved out a multi-cultural community on Windsor’s west side, the Detroit Catholic noted.

So a group of lay people are raising $20 million to restore Assumption and its Rosary Chapel. The project will begin with replacing the roof with a copper-shingle roof. The Diocese of London, Ontario, has pledged $1 million.

Our Lady of the Assumption started as a mission to the Huron Indians who lived northwest of the Detroit River.

The current church was built in 1845. For several years it was the cathedral of the London Diocese, which was erected in 1856.

Fr. Maurice Restivo, CSB, pastor of Assumption, said that the Huron-Wyandot First Nations donated the land on which the church stands. Part of the renovation project might include a formal recognition of that.

“We are looking at perhaps a museum, not the whole thing, but some space dedicated to the indigenous people involved,” said Fr. Restivo.