The Gammarelli family runs one of Rome's oldest family-owned shops.

When Pope Francis was elected in 2013, many commentators noted how his simple dress style was a departure from the more elaborate outfits of his predecessor. Yet, both Francis and Benedict sourced their elegant velvet mantles and woolen shawls from the same family-owned business that has been serving the Vatican since 1789, the Gammarelli tailor shop. 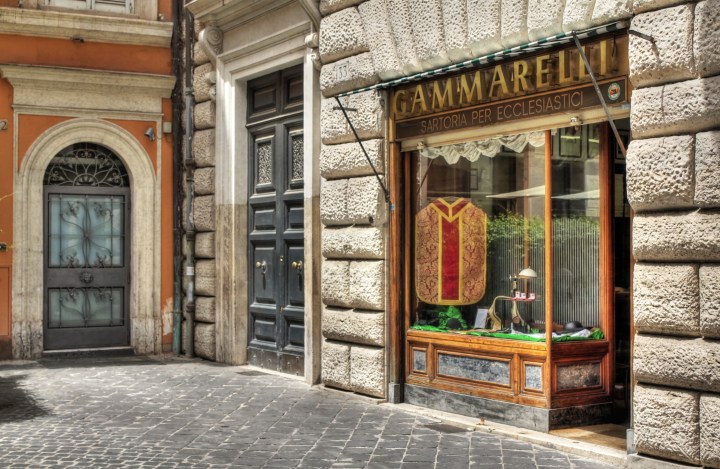 The first commission for eclessiastical outfits was received in 1786 by Roman tailor Annibale Gammarelli, the founder of the now 200-year-old business, who served bishops and other prominent figures throughout the papacy of Pius VII. When Leo XII succeeded Pius VII, he asked the Gammarelli shop to make his clothes. Gammarelli has been serving popes’ sartorial needs ever since.

“Every time we get an order for papal dress we stop everything else we might be doing,” Lorenzo Gammarelli, a descendant of the founder who now runs the tailor shop, told Italian news website snapitaly. “We usually start working on the clothes for the new pope from the day of the funeral of the previous one and work with a very tight deadline as we need to deliver our clothes before the start of the conclave meeting to elect the new pope.”

All clothes are meticulously hand-made using the purest yarns sourced from long-time suppliers in Italy and embellished with meticulously crafted inserts. The main fabric used for papal clothes is white wool, used for the tunic, but silk, used for inserts and buttons, and velvet, used for the cape and the mantle, are also prominent. Whenever the Gammarellis get a commission for a soon-to-be-elected pope, they have to provide three identical outfits in three different sizes, small, medium and large, so that by the time the conclave has decided on a candidate he can have an outfit ready, no matter his size.

Style has been fairly constant since the Gammarelli got into business in 1786. However, things have changed a little under the current pope, who has made headlines for breaking with some of the earlier sartorial traditions in favor of a more simple style. Compared with his predecessor, Francis opted for more simple and lightweight fabrics. As noted by Crux Now, his sash is not made of silk and does not bear his emblem. Francis has also opted for more sober black shoes, while his predecessor famously loved the traditional red loafers. As Crux Now notes, Francis’ style is inspiring a trend among Catholics, who are now favoring more sober and simple clothes.

Whether this may prove a long-term shift or a momentary trend, the Gammarellis, who are listed among the oldest family-owned shops in Rome, will be ready to accommodate the sartorial needs of many more popes to come.