Pope Francis’ words to priests should be heard by every Christian 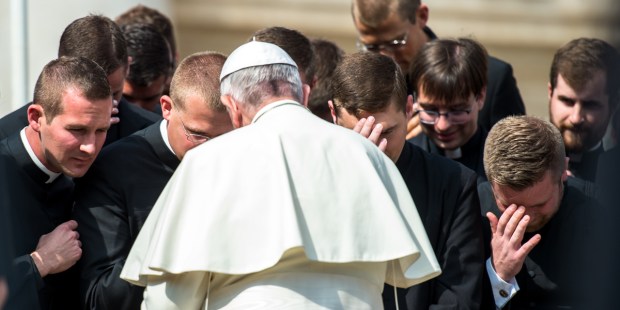 We know the head will not merely restore the beauty of His Bride, but even more …

On Sunday, the 160th anniversary of the death of St. John Marie Vianney (the patron saint of parish priests), Pope Francis released a letter to priests.

Read more:
Pope Francis writes letter to priests on this feast of John Vianney, their patron

In more candid terms than perhaps anywhere else in his writing, the Holy Father acknowledges the deep pain the recent sexual abuse crisis has caused in the Church—above all to victims, but also to priests throughout the world who have been betrayed by their brother priests. Even while naming the deep suffering of our times, the letter is marked by bright words of encouragement and gratitude, words, while meant especially for priests, that will refresh the whole Church.

The letter is marked by bright words of encouragement and gratitude, words, while meant especially for priests, that will refresh the whole Church.

First, the Holy Father assures his priests that the present time of sorrow is being met with reform. He writes,

I am convinced that, to the extent that we remain faithful to God’s will, these present times of ecclesial purification will make us more joyful and humble, and prove, in the not distant future, very fruitful.

Even as the faithful and priests alike suffer from the wounds caused by the clerical sexual abuse crisis, the Holy Father sees a way forward.

The Lord is purifying his Bride and converting all of us to himself. He is letting us be put to the test in order to make us realize that without him we are simply dust. He is rescuing us from hypocrisy, from the spirituality of appearances. He is breathing forth his Spirit in order to restore the beauty of his Bride, caught in adultery.

The biblical image of a broken marriage undoubtedly points to the gravity of the crisis. Yet, with full confidence in the grace of Christ, we know the head will not merely restore the beauty of His Bride, but will find ways as unexpected as they are eminent to redound to the glory of Christ.

Second, we must cling to the powerful weapon of gratitude. The Holy Father warns us that brooding causes us to lose perspective. He writes,

At those times [times of trial], it is important–I would even say crucial–to cherish the memory of the Lord’s presence in our lives and his merciful gaze, which inspired us to put our lives on the line for him and for his People.

With thankful hearts, we can overcome the systematic isolation and persecution of the enemy.

Third, Pope Francis offers hearty encouragement, even offering practical advice to priests. Most importantly, he warns them against the dangerous vice he names “sweet sorrow.”

All of us are aware of a sadness that can turn into a habit and lead us slowly to accept evil and injustice by quietly telling us: ‘It has always been like this.’

This sadness, recognizable to any Christian, inhibits our ability to be converted. It captures our hearts and makes them hostages to resentment and hostility. Discouragement, desolation, and despair are the fruits of this dangerous attitude.

The Holy Father reminds us: Christ has first prayed for us (Lk 22:32). He writes,

The Lord is the first to pray and fight for you and for me. And he invites us to enter fully into his own prayer.

Sometimes the prayer of Christ we enter is the prayer of Gethsemane. Even then, we need to look to Christ, who tells us, “Come to me, all you who are weary and are carrying heavy burdens, and I will give you rest. (Mt 11:28).” The Holy Father urges priests to be faithful to spiritual direction. A brother, he says, with whom the priest can share the experience of discipleship will help the priest to hear the voice of Christ.

The priest’s relationship with his people, too, will conform him to Christ.

Foster that relationship and expand it. Do not withdraw from your people, your presbyterates and your communities, much less seek refuge in closed and elitist groups. Ultimately, this stifles and poisons the soul.

The temptation to disengage and retreat looms, especially as priests face frustrations and failure. Ultimately, to be united as priests, to be united with our people, is an expression of our union with Christ.

The Holy Father’s letter directly confronts today’s temptations and sorrows. While recognizing the pain and suffering the clerical sexual abuse crisis has caused, the Holy Father offers a vivid and practical exhortation to priests to persevere in their love for the Church. May his words of advice be heard by every hurting soul, that they might be renewed and strengthened.