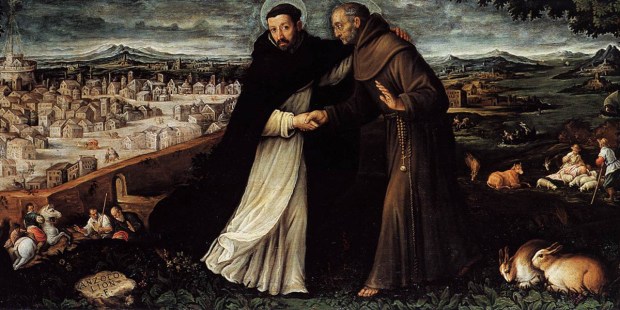 Both saints reportedly appeared in a dream physically holding up the Church and saving it from destruction.

The Catholic Church was in need of great reform in the 13th century. Confusion about the Church’s teaching was widespread, and many clergy members were not living a life according to the Gospel.

In response to the crisis, Pope Innocent III convoked the Fourth Lateran Council, but he still needed help to bring these reforms into practice. For that God sent him two saintly men who would change the world.

First, St. Francis embarked on a journey to Rome to seek Pope Innocent’s approval of his new religious community, eventually called the “Order of Friars Minor” (usually referred to as “Franciscans” today). Pope Innocent was skeptical of Francis’ initial Rule (the plan for the community) and dismissed him and his followers. Then, according to a popular legend recounted by Leon Le Monnier in his History of St. Francis of Assisi, Pope Innocent had a powerful dream.

“Truly,” cried the Pontiff, “this is indeed the man who has been called to sustain and to repair the Church of God.” And in explanation of these words, he related how, some time before, after a day on which he had been anxiously considering the misfortunes of the Church, he saw in his sleep a mendicant supporting the Lateran Basilica which was tottering and ready to fall. Then, bending towards the man whom he believed was called to this high mission, he embraced him paternally, and unreservedly, but in words only, gave his approval to the rule which he presented to him.

Francis’ order of mendicant friars was approved in 1209 and has since had a great impact on the world through their missionary zeal and humble poverty.

Next, St. Dominic arrived in Rome and asked for permission to created a new religious community called the “Order of Preachers” (more commonly known today as the Dominican Order). Initially Pope Innocent refused the request, but then something happened that changed his mind. According to the Golden Legend, Pope Innocent had a particular stirring dream.

Then one night in a dream he saw the Lateran basilica about to fall in ruins; but, while he watched fearfully, Dominic, the man of God, came running from the opposite side, placed his shoulders against the tottering building, and held up the whole structure. When the pope awoke, he understood the meaning of the vision and happily entertained the petition of the man of God.

Dominic’s new order was officially approved on December 22, 1216. His new order would greatly influence Europe and helped achieve many of the reforms Innocent desired.

The story of these two dreams appeared early on in medieval documents and biographer Michael Robinson explains in his book, St. Francis of Assisi: The Legend and the Life, that a certain cardinal close to Pope Innocent named Capocci was credited for spreading it. Robinson continues by writing, “it is possible that in the 1240s Capocci was telling a story about the pope’s dream; as a supporter of both orders of friars the cardinal may have felt that the dream was being fulfilled in either or both of them.” The result was that both the Franciscans and Dominicans claimed the dream for their own founder and included it in every biography.

Most likely Pope Innocent had one dream, instead of two separate dreams, and the dream may have been ambivalent as to who the “mendicant” friar was who was holding up the Lateran basilica. He then told Capocci about the dream and later on it was adopted by both orders.

Either way, what is true is that St. Francis and St. Dominic fulfilled that prophetic dream and helped reform the Church at a crucial time in history, saving it from total destruction.

Read more:
Here’s what you need to know about the Dominicans

Read more:
Here’s what you need to know about the Franciscans