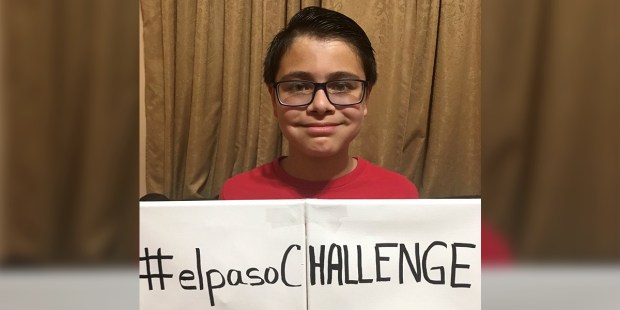 School boy asks community to carry out 22 acts of kindness to represent each victim of the shooting.

When Ruben Martinez heard about the deadly shootings in El Paso he found it really difficult to come to terms with what had happened — just like the rest of the world. He was so traumatized by the event that he asked his mom, Rose Gandarillo, if they could do a home delivery instead of going to the grocery store.

“I told him you cannot live in fear and asked him if there was something he wanted to do to help,” Gandarillo explained to the BBC. The 11-year-old came to his mom with a handwritten note challenging people in his community to demonstrate their kind hearts while honoring the victims of the shooting.

My 11 year old came to me with an idea. #elpasoCHALLENGE He challenges ALL El Pasoans to commit 20 Random Acts of Kindness. One for every person that was killed in our city’s mass shooting. Let’s get this done El Paso. @abc7breaking @kels1142 @YsletaISD @EPPOLICE @elpasoisd pic.twitter.com/pvy5Q9G4f6

The idea was initially for El Pasoans to carry out 20 acts of kindness representing each person killed in the shooting — later, as the number of deaths rose to 22, so did the number of acts. The thoughtful sixth grader even added some suggestions of the sorts of acts people could carry out: “mow someone’s lawn, visit a nursing home, pay for someone’s lunch or dinner, or comfort someone when they are sad or distressed.”

Ruben finished off his message: “This will show the world that people from El Paso, Texas, are kind and care for each other.” With such a heartfelt challenge, Gandarillo took to social media to share her son’s letter and unsurprisingly it inspired people from all over the country and even further afield, with one mom posting: “I‘ll start in Germany — with my two daughters who cannot understand what is going on over there but who are also very good at kindness.”

Ruben, however, isn’t just sitting around hoping others will join in. He is spreading his message through example. But not only is he out carrying out his own acts of kindness, he’s actively encouraging others to join the challenge … and it’s working.

While Marine Chris Castaneda was dining at Taco Bell, Ruben approached him and spoke to him of his challenge. Casteneda shared with Caleb Parke for Fox News that he’s already done four deeds and is intent on doing more, adding, “it shows that all it takes is one person, one step, one question to make a big change.”

As more people rise to the challenge, there should be many random acts of kindness carried out throughout the country. Ruben’s simple message to his fellow El Pasoans, and the rest of the world, is one close to our hearts: “Be kind to each other all day every day, all night, every night.”

Read more:
These random acts of kindness by total strangers will make your day