Another saint for England? John Bradburne gave his life for lepers in Africa 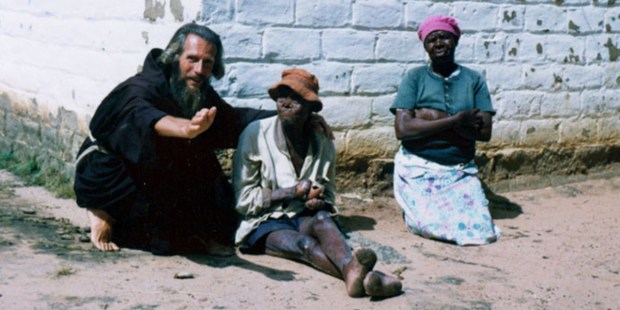 He fought with the Indian Army in World War II, and spent the rest of his life seeking God.

John Bradburne was born on July 1, 1921, in Cumberland County, located in northwest England. His father was an Anglican minister, and his mom, Erica May, was a homemaker caring for their five children. The family had relatives in theatre and in politics and were related to the famous British playwright, Sir Terence Rattigan. The Bradburnes were socially prominent and well connected.

While in school at Norfolk John joined the Officer Training Corps and when World War II began, he volunteered to join the Indian Army. His mom had been born in the city of Lucknow, in India, and he wanted to honor her. He was accepted into the Officer Cadet Training Unit and upon completing his training was assigned to the 9th Gurka Rifles of the Indian Army. Before he knew it, he was in British Malaya preparing to defend against the impending invasion of the Japanese Imperial Army.

When Singapore fell, John and another officer spent a month staying “low” while trekking through the jungle. Finally, they found an abandoned sampan and tried to sail to safety. They almost drowned but were rescued by a Royal Navy destroyer. John finished his military service in Burma. The war years gave him a longing for religion and he returned home with a desire to learn all about the Catholic faith.

He was allowed to move in with the Benedictines of Buckfast Abbey and in 1947 was accepted into the Church. The Benedictines would not allow him to become a monk until he had spent at least two years as a Catholic. Not willing to wait and answering his yearning to travel, he spent the next 16 years wandering Europe and the Middle East.

During these years he managed to serve at various churches and monasteries, in places like Jerusalem and Italy and thought of joining such orders as the Carthusians, the Benedictines, and the Congregation of Our Lady of Sion. On Good Friday 1956, he joined the Secular Franciscan Order. He wanted to remain a layperson but requested that he be buried in the habit of St. Francis.

In 1962 he wrote to his friend, John Dove, who had become a Jesuit priest and was living and working in Rhodesia. Having a deep desire for solitude, he asked him if there was “a cave in Africa where I can pray?” Father John needed volunteers and asked John to come to Rhodesia. He explained that he could not promise solitude, but he desperately needed missionary helpers.

Toward the end of that year, John Bradburne left for Rhodesia. Over the next several years, he worked as a servant for Jesus tending to the needs of the poor and hungry in Africa. Then in 1969, John visited the leper colony at Mutemwa. This seemingly God-forsaken place had suddenly been blessed with its new caretaker. John Bradburne would live and work and tend to the lepers in this colony from that day forward.

Like St. Damien of Molokai, Brother John began caring for and loving the lepers.

He cared for his patients the best he could; he would bathe them, feed them, and when they lost their decaying limbs, would hold and comfort them. John even taught them Gregorian chant so they might have beautiful music at Mass.

The Rhodesian Bush War had been raging since 1964. In 1979 it had finally come to the area surrounding Mutemwa. Catholic missionaries and aid workers, including four Jesuits, three Dominican sisters, and an Italian female doctor riding in an ambulance had been ambushed and killed. This happened close to John’s leper colony. He was advised to flee the area, but he would not leave his “family” alone.

On September 2, 1979, rebels found him hiding in a hut. They mocked him and tortured him and then, as he knelt in prayer, emptied an automatic rifle into his back.

Read more:
The Church in northeastern India has grown in surprising ways

It was reported that the assassins ran in fear when they heard beautiful music coming from John’s body. Other miracles have been attributed to Brother John’s intercession, including a woman in South Africa who regained the use of her legs and a Scottish man cured of a brain tumor.

John Bradburne’s cause for canonization has been locally approved, and his cause has gone to Rome. It will officially be opened on September 5, 2019, the 40th anniversary of his murder.