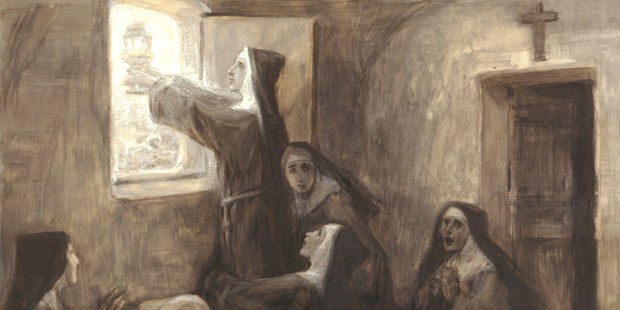 In the face of an invasion, St. Clare took out her secret weapon.

St. Clare, faithful disciple of St. Francis of Assisi, possessed a strong faith in God that did not waver, no matter what the circumstances. This faith was put to the test when an army of soldiers was creating havoc in the valley of Spoleto and turned their eyes towards Assisi.

Just outside the walls of Assisi sits the monastery of San Damiano, where St. Clare and her small community of nuns lived. When the pillaging soldiers reached Assisi, their first obstacle was this monastery and so they began to scale its walls and terrorize the innocent religious women.

At this point St. Clare was in her sickbed, but her sisters were deeply frightened and went immediately to their mother for counsel. The Catholic Encyclopedia narrates what happens next.

Clare, calmly rising from her sick bed, and taking the ciborium from the little chapel adjoining her cell, proceeded to face the invaders at an open window against which they had already placed a ladder. It is related that, as she raised the Blessed Sacrament on high, the soldiers who were about to enter the monastery fell backward as if dazzled, and the others who were ready to follow them took flight.

She also kneeled down and said a short prayer to God, asking him to protect the remaining parts of the city. Instead of trying to find another place to enter the city, the army retreated and never came back, deciding it was better to leave it alone.

Interestingly enough, this was not the last time that St. Clare saved the city. Later on a soldier led the imperial army against Assisi, hoping to claim it for himself. When St. Clare heard that his troops were drawing close to the city, she urged her community to stop everything and pray to God for protection.

Immediately the army was set into confusion and dispersed. The leader of the army never came back and the city of Assisi remained in peace.

Prayer and the Eucharistic presence of Jesus were St. Clare’s secret weapons, able to fend off entire armies posed to strike her monastery. It reminds us that true faith can “move mountains” and even protect a city from war.

Read more:
How St. Martin the soldier defeated the many temptations of Satan