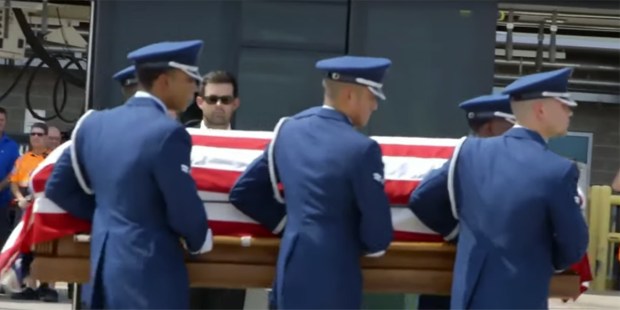 Fighter pilot Col. Roy A. Knight Jr. comes home to a hero’s welcome, thanks to his son.

Fifty-two years ago Bryan Knight accompanied his father, Maj. Roy A. Knight Jr., to Dallas Love Field Airport as he set off to fight in the Vietnam War. This was the last time the five-year-old would see his dad alive.

Maj. Knight had copied his five big brothers and joined the air force in 1948 at the tender age of 17, according to his obituary. After serving abroad in Germany and France, he returned to his native Texas with a wife, Patricia Henderson, and their three children, and became a flight instructor. A few years later, in 1966, Maj. Knight received orders to join the war in Vietnam.

In January 1967, he set off to join the 602nd Fighter Squadron (Commando) and just five months later, on May 19 1967, his plane was shot down during an air attack on Northern Laos. Maj. Knight was declared Missing In Action. In his absence he was promoted to colonel.

Although Col. Knight was eventually declared dead in 1974, it took a further 20 years to excavate the crash site. Finally in February this year, a joint effort of the U.S. and the Lao People’s Democratic Republic located and identified his remains, according to Doha Madani for NBC News.

After so many decades of not knowing, this surely brought some comfort to the family. Yet the bittersweet discovery was made all the more special when Col. Knight’s youngest son Bryan was able to personally fly his father’s remains home: the ultimate way a pilot son could honor his father all those years later.

Bryan, a captain for Southwest Airlines, brought his father home on August 8 to an airfield that was all prepared and ready to welcome the war hero with full military honors. “Our Southwest Airlines family is honored to support his long-hoped homecoming and join in tribute to Col. Knight as well as every other military hero who has paid the ultimate sacrifice while serving in the armed forces,” the airline said in a statement released to the press.

After an announcement to all passengers and staff, people stopped in their tracks to pay their respects to Col. Knight as he finally returned home, captured by many on social media.

A pilot in the #VietnamWar was killed and his remains were recently identified. Today, his son, also a pilot, flew him back to the last place he saw him alive, @DallasLoveField. I’m so honored to have been able to witness this. WELCOME HOME, SIR! 🇺🇸 @SouthwestAir @usairforce pic.twitter.com/SqUiSHXxSv

Although the the fighter pilot was posthumously awarded with the Air Force Cross, Silver Star, Distinguished Flying Cross, Purple Heart and six Air Medals, perhaps the greatest honor would have been knowing that his very own son brought him home to finally lay him to rest.

Read more:
3 Inspiring Catholic heroes who gave it all

Read more:
All of humanity loses with war and terrorism, says Pope Francis