Around the world there are many ways that the Solemnity of the Assumption is celebrated. In Paris, a silver statue of the Blessed Mother is transported by boat along the Seine River. In Madrid the locals don colorful attire and dance through the streets, but in New York, there is a celebration that tops them all, and amazingly, it began only 25 short years ago in Chinatown.

The story begins decades ago in the depths of the forests near the Fujian Province on the Chinese coastline. The region was a missionary territory of the Spanish Dominicans in the late 19th century. Their legacy lives on, as evidenced by the large Catholic population that remains there today.

After the Chinese Communist Revolution in 1949 and the rise to power of Mao Zedong, Catholics and other religious groups were forced to align themselves with state approved/run versions of their faith, which were regulated and adapted to conform with the government standard, often in opposition to the true beliefs. Those desiring to remain faithful Catholics were forced to practice and worship in secret, which set the foundation for the underground Catholic Church of China. By the mid 1960s, amid a rising tide of religious persecution and violence, the underground Church had to go to extreme lengths to practice the faith in secret or risk imprisonment or worse.

The significance of the Solemnity of the Assumption

Not as well known as Christmas or Easter by the police who would be on the lookout for clandestine religious activities, the Solemnity of the Assumption presented a unique opportunity to gather in prayer and beg Mary’s intercession as a faith community. So on the evening of the Assumption after midnight, Catholics would make their way into the forests to hold a candlelight procession in honor of the Blessed Mother.

But that’s only the first part of this epic story. 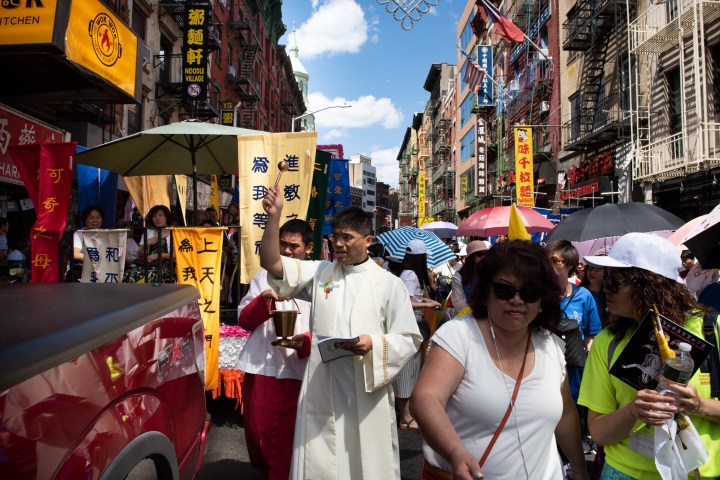 In the late 1980s, human trafficking and smuggling in the region had reached critical levels. A person wishing to flee China to the United States could pay $20,000; $2,000 up front and then, upon arrival in the United States, sell themselves into slavery — as a worker in a business such as a Chinese restaurant or laundry while receiving no pay — for two years to pay off the debt to smugglers .

During this time, a small group of Catholics from the Fujian Province were smuggled out and were ultimately granted citizenship in the United States. And like countless millions of immigrants and refugees before them, they ended up in America’s Melting Pot … New York City.

In 1994 this group arrived at the doorstep of the Church of the Transfiguration in Chinatown, popularly known as “The Immigrants’ Church.” They approached the pastor, Fr. Raymond Nobiletti, with a simple request: to have an Assumption procession as they had done back home but during the day. Fr. Nobiletti, moved by their story, helped them organize, and on August 14, 1994, they took to the streets rejoicing in the freedom to celebrate their faith as they never could have before, and thanking the Blessed Mother for their answered prayers.

Word of this spread like wildfire throughout the Chinese-American community and now, a mere 25 years later, on the 2nd Sunday of August, New Yorkers are greeted by the sounds of thousands of raised voices proclaiming the Hail Mary in Cantonese as a marching band plays the Salve Regina for a two-hour long procession through the corridors of lower Manhattan.

What began as a top-secret worship operation in the depths of a forest in China has become one of the largest Marian events in the grandest of all cities, demonstrating once again the power of persevering Faith. And the torch-bearing Lady that stands tall at the city’s gates can be proud again of that for which she stands, as those whom she embraces with the loving arms of liberty celebrate their freedom by honoring the Lady through whom all graces flow.