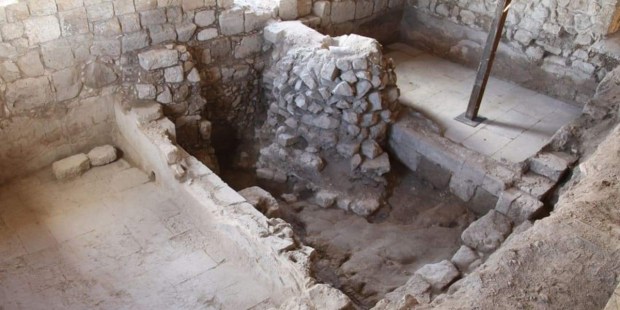 The property is set beside a castle in the village of Mi’ilya.

The people of Mi’ilya, Israel, have a great fondness and respect for the science of archaeology, so much so that when a the ruins of a Crusader castle began to crumble, the whole town came together to fund its renovation. Now Ruth Schuster from Haaretz reports that a house next to the ruins has become the site of a major excavation, which has yielded the largest winery from medieval times in the region.

In a mix of archaeological curiosity and a love of history, Salma Assaf decided she wanted to excavate her property. She hired local archaeologist and teacher at the Zinman Institute of Archaeology at the University of Haifa Rabei Khamisy, who dug up a winery unparalleled in size compared to other such facilities from the same time period.

Schuster notes that the winery was built with two large treading floors — where the grapes were crushed by stomping — which drained into a large pit carved from bedrock. The operation was built on such a large scale that it is possible that the wine it produced could have stocked the whole region. Khamisy commented:

“The Byzantines had much larger wineries, but the Crusaders had nothing comparable, as far as we know.”

When asked why Assaf decided to excavate her property, she responded that she simply, “wanted to know what was underneath [her] home.” The Assaf family is one of the oldest in Mi’ilya, having been there for the last 200-250 years.

While the cost of excavation is very high, Assaf funds the project with the revenue from a gas station that she owns, as well as rent from several properties. She intends to convert the winery into a museum that displays some of the many cultural artifacts discovered in Mi’ilya and even produces some wine.

To fund her dream of the museum, Assaf has converted her home into a restaurant, which will feature small glass windows in the floor to allow guests to peek into the winery. She hopes that these brief glimpses into the past will prompt excitement over the coming museum. The restaurant is set to open in late August.