Why marriage is inherently “unfair” 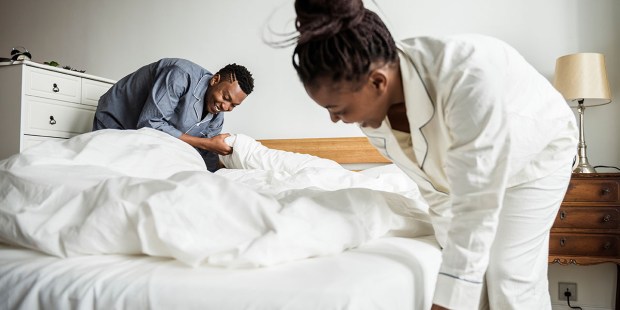 St. Bernard of Clairvaux sheds some light on how marriage is not really an equal partnership.

A study was recently published reminding us that, in married households, women do the vast majority of the housework. Guilty as charged. It isn’t that I purposely contribute less, but that I, apparently like most men, have embarrassingly low standards. I’m content to let the dishes pile up, don’t particularly care if the sink looks spotless, and don’t see the point in folding laundry when cramming it in a random drawer works just as well. Perhaps, as Mary Kenny contends over at the Catholic Herald, men’s brains are simply wired differently. Whatever the cause, I can certainly see how the situation seems unfair. It seems unfair because it is unfair.

In fact, most marriages are riddled with unfairness. If the goal is a perfectly equal partnership in which duties are carefully discussed and agreed upon such that neither partner carries more of the load … well, I’ve never seen that arrangement in real life. Inevitably, married couples fall into a comfortable pattern that seems to work for them. I’ve seen marriages organized in all sorts of ways, and while seldom does it seem “equal” to an outside observer, it often works for them.

I wonder what it is about love that leads us to tolerate inequality. Love, I would think, would be the one state of life that would do the opposite, that would create a perfectly balanced partnership, and yet it never quite works out that way.

With this week’s feast of St. Bernard of Clairvaux, we have an unlikely example of the inequality of love. Bernard was a Benedictine monk who lived in the 12th century. He wasn’t married, but like all monks he made a series of vows that bound him in a “spiritual marriage” with God. During his time, the monks around him had somewhat relaxed from the original Rule of St. Benedict — the founding guidelines for how the monks would honor their vows. Bernard felt that he had more to give and desired to contribute more to his relationship with God. He was painfully aware of how much God had given to him and how little he had given in return, writing, “Clearly, lover and Love, soul and Word, bride and Bridegroom, creature and Creator do not flow with the same volume; one might as well equate a thirsty man with the fountain.”

What Bernard noticed is similar to what the study about household chores points out — in any good relationship it is impossible to add up and even out the love that is contributed. Love creates inequality, and Bernard’s contribution pales in comparison to what he is receiving.

Knowing this, maybe the question to ponder is not so much, “Is my partner treating me fairly?” What we should ask is, “Am I giving all my love to this relationship? Am I holding anything back? How can I give more?”

This sentiment is summed up by poet W.H. Auden, who writes, “If equal affection cannot be, Let the more loving one be me.” In other words, our focus ought to be not on what we are receiving, but on what we are giving. In a healthy marriage, in which both spouses have this generous attitude as their mindset, love covers a multitude of seemingly unequal arrangements. It means I can let my wife choose the restaurant every time; I can listen to her talk about how her day went and not worry if I ever get my turn to talk about my day; I can carry more of the household chores when she isn’t up for it. In return she can do the same for me. Our marriage may or may not be equal, and it may or may not seem equal to other people, but that really doesn’t matter. What matters is that we’re both contributing all of our love to the best of our abilities.

Marriage is not really a partnership, it’s a unification. It’s a complex, messy, opaque state of life in which the hearts of two people are forever mingled into a single heart. It’s counter-intuitive, in that by giving our freedom away and not counting the cost, we are made happy. Maybe the secret, like St. Bernard noticed, is in seeing how God himself is delighted to love us even though the relationship is laughably unequal. Of course, none of us is God, but we are called to be more and more like Him.

After dinner each night while I play the piano or relax on the patio with a book and a beer, my wife can be found in one of the children’s bedrooms nursing the baby while simultaneously helping one of the older ones with a problem that, “only Mommy can solve.” This is how she loves her family, it’s how she loves me. It motivates me to stop what I’m doing and go take over bedtime story duties or finish washing the dishes. Her love, without a word, makes me want to respond even more generously with my own love. That’s how real love should work.

Read more:
9 Saintly couples to turn to for a stronger marriage

Read more:
Why accountability is the unsung hero of my marriage