Is this really Jesus? A primer on Christ in the Eucharist 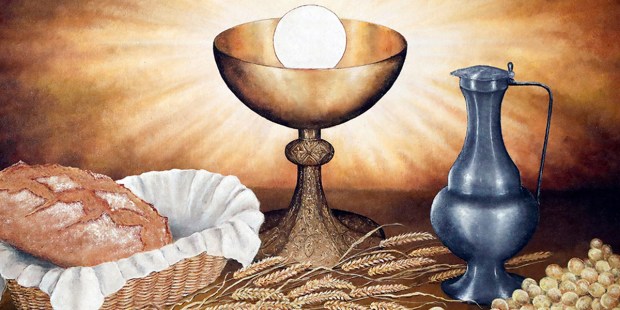 Most Christians on the globe belong to a Church that believes in the Real Presence.

One reason so few people today believe what the Church teaches about the Eucharist is that the teaching is so shocking: After consecration, the host at Mass isn’t bread; it is Jesus Christ himself. He just looks like bread.

Really. Here’s how the Catechism puts it: “In the most blessed sacrament of the Eucharist ‘the body and blood, together with the soul and divinity, of our Lord Jesus Christ and, therefore, the whole Christ is truly, really, and substantially contained.’”

Christians have always believed in the Real Presence. And it has always been shocking.

Jesus taught the doctrine most clearly in the sixth chapter of John:

“Jesus said to them, ‘Very truly I tell you, unless you eat the flesh of the Son of Man and drink his blood, you have no life in you. … For my flesh is real food and my blood is real drink.”

But the apostles soon learned what Jesus meant. As St. Paul explained, in First Corinthians, written around the year 54:

“The Lord Jesus, on the night he was betrayed, took bread, and when he had given thanks, he broke it and said, ‘This is my body, which is for you; do this in remembrance of me.’ In the same way, after supper he took the cup, saying, ‘This cup is the new covenant in my blood; do this, whenever you drink it, in remembrance of me.’”

After rising from the dead, Jesus dramatically demonstrated that he would remain with us in the Eucharist. In the town of Emmaus, two disciples didn’t recognize Jesus until …

“When he was at the table with them, he took bread, gave thanks, broke it and began to give it to them. Then their eyes were opened and they recognized him, and he disappeared from their sight.”

The Eucharist united the first Christians.

What did the first Christians do? They celebrated the Eucharist, according to Acts:

“They devoted themselves to the apostles’ teaching and to fellowship, to the breaking of bread and to prayer.”

The invaluable early Christian teaching book, the Didache (79), guards the Eucharist, and calls it a “sacrifice”:

“Let no one eat or drink of your Eucharist, unless they have been baptized” (Chapter 9). “Every Lord’s day gather yourselves together, and break bread, and give thanksgiving after having confessed your transgressions, that your sacrifice may be pure” (Chapter 14).

“Whoever eats the bread or drinks the cup of the Lord in an unworthy manner will be guilty of sinning against the body and blood of the Lord.”

Justin Martyr, sometime between 147 and 161, wrote in his First Apology (Chapter 66) of “this food we call the Eucharist”:

“[W]e do not receive these things as common bread or common drink; but as Jesus Christ our Savior being incarnate by God’s word took flesh and blood for our salvation, so also we have been taught that the food consecrated by the word of prayer which comes from him, from which our flesh and blood are nourished by transformation, is the flesh and blood of that incarnate Jesus.”

The world understood what Christians believed, and they were shocked, accusing the Christians of cannibalism.

Through the years, the Real Presence has been an important part of Christian spirituality.

St. Francis of Assisi (1181-1226) said: “What sublime humility … that the Lord of the universe, the divine Son of God, should stoop as to hide himself under the appearance of bread for our salvation.”

J.R.R. Tolkien (1892-1973) wrote to his son: “I put before you the one great thing to love on earth: The Blessed Sacrament. … There you will find romance, glory, honor, fidelity, and the true way of all your loves on earth, and more than that.”

To this day, most Christians worldwide believe in the Real Presence of Jesus in the Eucharist.

There are a little more than 2 billion Christians in the world. Half of those, about 1 billion, are Catholics (of those, only 7% are in the United States). Another 12% of the world’s Christians are Orthodox Christians who also believe in the Real Presence.

That means more than 3 of every 5 Christians belongs to a Church that believes in the Real Presence.

Where do we find it? In the Eucharist.

Read more:
They knocked him to the ground, but all he cared about was the Eucharist