The Nazis kicked him to death because he loved too much: Meet Blessed Teresio 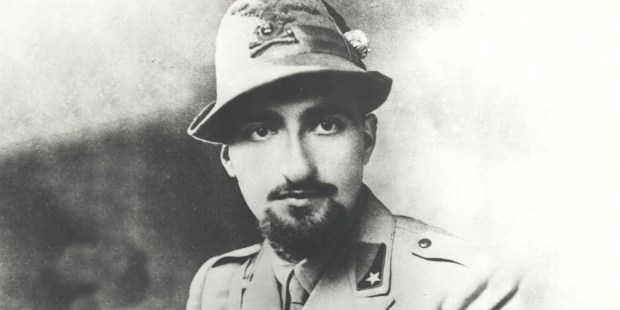 At just 29, he suffered a horrendous death trying to protect a fellow prisoner.

Teresio Olivelli was born in the northern Italian town of Como in 1916. His dad and mom, Domenico Olivelli and Cleleia Invernizzi, were devout Catholics who diligently practiced their faith. Teresio’s uncle was a priest, Father Rocco Invernizzi, and as Teresio began to grow, he turned to his uncle for spiritual guidance.

In 1926, the family moved to Pavia, about 200 miles south of Como. Teresio was only 10 years old, and already he was very good at Latin. He proved to be an excellent student, and after finishing high school, moved on to Ghislieri College. No matter what he was doing, Teresio always made a point of going to Confession every week and attending Mass and receiving Jesus in the Eucharist as often as possible. His faith was his life’s cornerstone.

Teresio was passionate about this work and wrote several articles about the social conditions of the day. These articles included recommendations for laws that needed to be enacted to help the poor. His thesis on the human dignity of all people, regardless of race, won an oratory competition in Trieste, Italy. It was during this time that Teresio also learned to speak fluent German.

Teresio was always aware of the plight of those being exploited and taken advantage of. He became a volunteer fighter in the Spanish Civil War. In 1939, he moved to Berlin. He had believed in the Fascist and Nazi Socialist philosophy but quickly began to realize this ideology was wrong. In 1941 he volunteered to fight on the Russian front but was seriously injured by frostbite. On his trek back to Germany, battling sub-zero temperatures and blinding snow, he managed to stop and help the wounded and dying, even if it was just praying and giving spiritual comfort to those he saw.

Arriving back in Germany, he was now turned against fascism. He refused to swear allegiance to the Italian Government, and the Nazis deported him to Austria. Somehow he managed to escape to Milan, arriving there in October of 1943. He immediately founded an underground newspaper and began promoting Christianity and Christian alternatives to fascism. He was sickened by the treatment of the Jewish people, and joined the Italian Resistance to fight back against the evil. The Nazis arrested him in Milan on April 27, 1944.

He was accused of being a leader in the Milanese Catholic Organization, which was hostile to the Nazi Fascists. He was taken to San Vittore where his torture began.

He was then transported to the Flossenberg Concentration Camp in Bavaria. Once again, he resumed his old habits, taking care of the sick, injured, and dying. He became a “priestly substitute” in the camp, going from prisoner to prisoner praying with them and comforting them. Many survivors gave testimony that his help and prayers saved many lives while he was there.

On Christmas Day, 1944, Teresio sat with a dying man, holding him, and praying with him. This man’s name was Odoardo Focherini. (He was beatified as Blessed Odoardo  Focherini in 2013.) On January 17, 1945, Teresio saw a Ukrainian prisoner being pummeled unmercifully. He drug his own emaciated body to the victim, and threw himself over the prisoner, trying to protect him from the blows he was receiving. Teresio’s reward was to be kicked to death by the guards. He had just turned 29.