Where does the pope live? 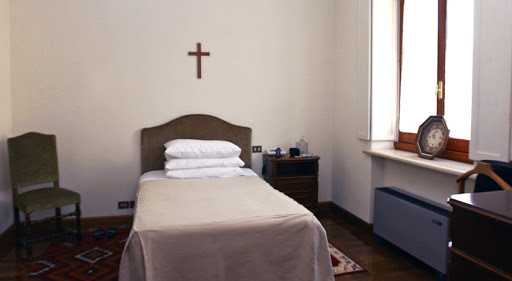 ©ServizioFoto graficoOR/CPP
A room at the Domus Sanctae Marthae, in the Vatican
Share
Print
Philip Kosloski - published on 08/19/19

Since St. Peter, the pope has lived in numerous places and not always in the city of Rome.

St. Peter was appointed by Jesus Christ to lead the Church after Jesus’ departure from this world. Initially Peter lived in Antioch, and is considered the first bishop of that city.

Peter also lived for a short time in Jerusalem, but later in his ministry, Peter traveled to Rome.

While living in the city of Rome, Peter lived with the local Christian community and we know of no specific house where he resided, though there is a local tradition connected to the house of St. Pudens (now known as the church of Santa Pudenziana). It’s most likely he was constantly on the move, preaching and healing, until he was eventually arrested and crucified.

According to the Catholic Encyclopedia, “As the place of execution may be accepted with great probability the Neronian Gardens on the Vatican, since there, according to Tacitus, were enacted in general the gruesome scenes of the Neronian persecution; and in this district, in the vicinity of the Via Cornelia and at the foot of the Vatican Hills, the Prince of the Apostles found his burial place.”

During the first few centuries subsequent popes were similarly on the move, and also under persecution.

It is believed that “Pope Symmachus (498-514) built a residence to the right and left of St. Peter’s [burial place] and immediately contiguous to it. There was probably a former residence, since, from the very beginning, the popes must have found a house of accommodation necessary in the vicinity of so prominent a basilica as St. Peter’s.”

At the same time, “From the beginning of the fourth century, when it was given to the pope by Constantine, the palace of the Lateran was the principal residence of the popes, and continued so for about a thousand years.”

This papal residence was located at the current basilica commonly known as St. John Lateran, located on the Caelian Hill of Rome.

Then from 1309 to 1376, the pope lived in Avignon, France, because of a political dispute. This resulted in a number of French popes who were under the political influence of the French king.

After this time period, “the popes returned to Rome [where] they resided first at Santa Maria in Trastevere, then at Santa Maria Maggiore, and lastly fixed their residence at the Vatican.”

At the Vatican, the popes resided at the Papal Apartments beginning in the 17th century and remained there (with a brief residence at the Quirinal Palace) until the pontificate of Pope Francis.

Since 2013 the pope has lived in St. Martha’s House, (often referred to in the Spanish translation, Casa Santa Marta, or in the Latin, Domus Sanctae Marthae), a building in the Vatican that was completed in 1996 and originally designed as a type of hotel or guest house for visiting clergy. Francis, who as a Jesuit is used to living in community, chose this residence in order to be less isolated. Pope Francis stays in what is essentially a hotel suite, which is described in an article on Aleteia as follows:

“The first room is a sitting area with a couple of chairs, a sofa, a desk, a bookcase and a crucifix. There’s absolutely no sign of luxury: absolute simplicity. The second room is a monastic sort of bedroom: a dark wooden bed, a wardrobe, a nightstand. The fluorescent lights make the environment a bit cold, like a boarding school room, but the pope isn’t one to take notice.”

It is uncertain if this will remain a papal residence after the pontificate of Pope Francis, as there are no particular laws governing a pope’s place of residence.

Read more:
A Tour of the Pope’s Home