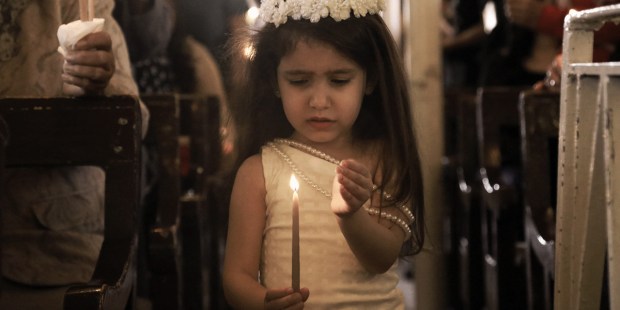 The rosaries will be distributed among a number of different Christian communities in Syria on September 15, the Feast of Our Lady of Sorrows.

On the Feast of the Assumption, August 15, Pope Francis, during the Angelus prayer in St. Peter’s Square, blessed 6,000 rosaries destined for Syria. They will be given to Christians in Syria who have had relatives or family members abducted or murdered during the civil war. This is part of an ecumenical initiative by Aid to the Church in Need (ACN) in partnership with Catholic and Orthodox Churches in Syria.

“The rosaries, made at the initiative of ACN, are a sign of my closeness to our brothers and sisters in Syria,” Pope Francis said as part of his Angelus address, adding: “We continue to pray the Rosary for peace in the Middle East and around the world.”

ACN arranged for the production of the rosaries in Bethlehem and Damascus.

The plan is to distribute the rosaries among a number of different Christian communities in Syria on September 15, the Feast of Our Lady of Sorrows. The motto of the initiative is “Comfort my people”; the project aims to commemorate the victims of war and offer spiritual support and comfort to the bereaved.

Speaking earlier to an ACN delegation headed by the organization’s Executive President Dr. Thomas Heine-Geldern, Pope Francis praised the work of ACN and the ecumenical initiative: “I thank ACN for everything you do. When we pray with the people in Syria, we become close to them.”

“The Holy Father has on several occasions expressed his support and approval for our commitment in Syria and the Middle East,” said Dr. Heine-Geldern, “and he has done so again today. For the families of the war victims, these blessed rosaries are a sign that the Pope and the entire Church are with them, praying for them and standing beside them.”

Since the start of Syrian civil war in 2011, support for suffering and persecuted Christians in Syria has been a priority for ACN. During this period, reported Dr. Heine-Geldern, ACN has funded 850 projects totaling almost $40M.

The work has enabled numerous Christian families to stay in the country, rather than emigrating. However, “money is not enough,” he said, adding: “Alongside material aid, the people in Syria need spiritual and moral support, for they are in a desperate situation. Together with our donors around the world, ACN is committed to helping them.”

On September 15, the “Comfort my People” initiative will take place in a number of cities in Syria. In each location there will be commemorative prayers and procession, to remember the dead and for the consolation and support of their families. That day, Pope Francis will again associate himself with the initiative by blessing an icon of Our Lady of Sorrows, Comforter of the Syrians.