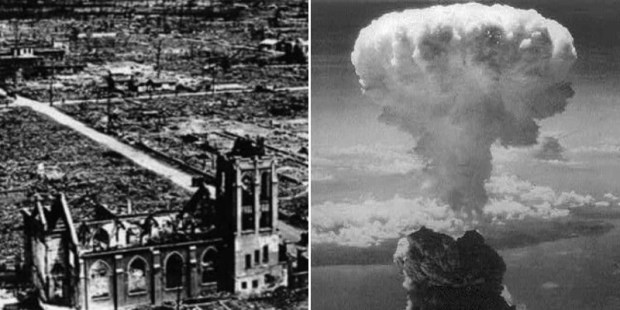 “We survived because we were living the message of Fatima.”

August 6 was the liturgical Feast of the Transfiguration of Christ. On that date in 1945, the transfigured face of God, reflected in His children, was disfigured with the devastating explosion of the atomic bomb over Hiroshima, in Japan, which exterminated nearly 140,000 men, women, and children.

Nonetheless, there were miracles among the destruction. At a distance of only eight blocks from ground zero of the explosion, a church where eight Jesuit missionary priests lived remained standing and practically intact, unlike buildings three times farther away that were completely destroyed. These Jesuits went down in history as the Hiroshima Eight.

They didn’t just survive the explosion that had instantly killed 86% of the people in that eight block radius; they lived into old age, unaffected by the radiation which, throughout the following months and years, killed many other survivors of the explosion. The more than 200 tests they underwent over the years all showed negative results for radiation poisoning.

One of the eight, Fr. Hubert Schiffer, was 30 years old on that August 6, 1945. He had celebrated the Holy Mass of the Feast of the Transfiguration, and had just sat down to eat breakfast when, in his own oft-quoted words, “Suddenly, a terrific explosion filled the air with one bursting thunderstroke. An invisible force lifted me from the chair, hurled me through the air, shook me, battered me, whirled me ’round and ’round like a leaf in a gust of autumn wind.”

When he was asked why he and his companions survived, Fr. Schiffer said,

We believe that we survived because we were living the message of Fatima. We lived and prayed the Rosary daily in that home.”

The Franciscan Convent of Nagasaki, the Japanese capital of Catholicism

On August 9, 1945, another atomic bomb was dropped—this time on Nagasaki, the city known as the Japanese capital of Catholicism since nearly two-thirds of Japan’s Catholics lived there. Nagasaki was devastated. The Franciscan Convent built by St. Maximilian Kolbe, however, remained standing.

The Polish saint, martyred in the concentration camp at Auschwitz during that same war, had decided to build the convent in a location that many thought was poorly chosen because it was not near the center of the city. Despite this criticism, Maximilian insisted on a plot of land located behind a mountain.

It was that mountain, in fact, that protected the convent when the atomic bomb destroyed the city, killing nearly 70,000 people.

In the midst of such horrible death and destruction, God—apparently at least in part due to Mary’s intercession—protected those missionaries, but surely not only for their own sake. They lived so they could minister to the injured, sick, and dying from the attack. They lived so they could be witnesses to the world of the horrors of war and specifically of nuclear weapons, witnesses to God’s power and mercy, and witnesses to the importance and power of prayer.

Seventy-four years later, have we learned the lesson?

Read more:
The Story of the Catholic Convert Who Survived Nagasaki